In January 2009, Zhanar S. Aitzhanova, Kazakhstan's Vice Minister of Industry and Trade and her country’’s chief negotiator at World Trade Organisation (WTO) has said that the trade between the two countries had gone up to a mammoth 232 million dollars. She added, of this, building material like asbestos has contributed 15 million dollars by the first ten months of 2008.

UN statistics indicates that India imported roughly 306,000 MT of asbestos in 2006. Out of which 48, 807 MT was imported from Kazakhstan. The rate of consumption in India is increasing at an alarming pace, which is fraught with disastrous health consequences.

In effect, Kazakhstan is exporting death and disease to India by dumping its asbestos in India. Kazakhstan President Nursultan Nazarbayev was the chief guest at the Republic Day. He has signed some trade agreements with India during his visit. 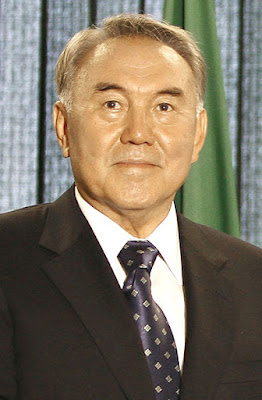 It provides an occasion to take stock of its relationship with India. Government of Kazakhstan along with Russia, Zimbabwe, Canada, and Brazil have worked in tandem with the chrysotile asbestos industry and governments of countries like India to ensure that the ongoing toxic corporate crime of letting unsuspected consumers and workers suffer preventable but incurable fatal asbestos diseases continues with impunity.

According to a report, “Killing the Future - Asbestos Use in Asia” co-published by Ban Asbestos Network of India (BANI), “From the beginning of the 20th century until the outbreak of World War II, world production of asbestos rose by 2000%. Global production is currently 2,230,000 tonnes (t)/year, with the majority of fiber being mined in Asia.”

In November 2008, the 126 nations that have ratified the UN’s Rotterdam Convention had a meeting in Rome to discuss inclusion of hazardous substances like Chrysotile asbestos. These meetings take place every two years to add new hazardous substances to a list of the Convention. Those substances that are included in the list create an obligation for an exporter to first notify an intended recipient country of the harmful status of the substance that is being shipped. This procedure is called Prior Informed Consent (PIC) Procedure meant to protect gullible and vulnerable countries and their citizens.

It is quite strange as to why the seven asbestos-importing countries agreed to join (asbestos exporter) Kazakhstan in opposing the PIC-listing of asbestos because it would not have changed anything for them since they would have been free to go on importing it in any case. The interest of the asbestos producers and exporting countries that includes Russia, Zimbabwe, Canada, and Brazil was successfully represented at the UN meeting by Kazakhstan, the second largest producer of chrysotile asbestos in the world.
Posted by mediavigil at 11:05 AM