AISA SUPPORTS CALL FOR BAN ON ASBESTOS FACTORIES IN BHOJPUR

Ara/Patna/New Delhi 24/2/2011: Drawing the attention of the Bhojpur District Magistrate, Dr Pratima S Varma towards the recent inquiry order by Chief Minister Secretariat in the matter of Closure of Asbestos Factory, the recent Supreme Court order and the pending White Asbestos (Ban on Use and Import) Bill, 2009, a petition has been given to her emphasizing the compelling logic for the District Administration to stop the ongoing construction of the asbestos factories in Giddha and Bihiya.

A press meet was addressed today in Ara at the office of Communist Party of India (Marxist-Leninist) Liberation demanding immediate stoppage of the construction work of asbestos factories in Giddha and Bihiya. The petition was shared with the media persons. Ban Asbestos Network of India (BANI) addressed the media persons in the presence of Raju Yadav of All India Students Association (AISA), Amarji and Ashokji, leaders of CPIML (Liberation) and Dharmatma Sharma, a concerned villager who lives in the proximity of the proposed asbestos plant in Giddha and a member of District Committee of SUCI (Communist). AISA supports the call for ban on asbestos factories in Bihar. The Press Handout issued today is attached. The Press Meet was organized by AISA.

Earlier, BANI did a site visit of the proposed factories in Giddha and Bihiya. It noticed that the construction work has reached quite an advanced stage on 23rd February and 24th February unmindful of the anti-asbestos movement in Muzaffarpur. This visit was undertaken pursuant to a decision of the Asbestos Virodhi Nagrik Manch (AVNM), Patna in its meeting dated 21st February.

On inquiry at both the places BANI took testimonies of the villagers. It learnt that the public hearing which happened was fake. The villagers never got a copy of the Environment Impact Assessment (EIA) report to assess the hazards associated with asbestos based factories which is mandatory pre-condition for the conduct of public hearing. This is in manifest violation of the EIA Notification, 2006 under the Environment Protection Act, 1986.

At Bihiya, there is no board to reveal that the plants under construction are going to be two factory units: a asbestos based cement factory and a asbestos grinding factory. BANI representative was accompanied by two local people faced hostile security guards at the factory gate who did not have any identity cards to reveal that they were workers of the proposed factory units.

At Giddha, the factory site is in close proximity to populated areas. The villagers never learnt about any EIA report or public hearing. In view of the same, the environmental clearance granted by the central environment ministry and approval by Bihar State Investment Promotion Board must be withdrawn.

It may be noted that an earlier letter of BANI dated 3rd February, 2011 was handed over to DM Bhojpur seeking her intervention in stopping the proposed asbestos plants in Bhojpur. The Bihiya plant is being set up by Chennai based Ramco Industries Ltd. The proposal is to establish a 120,000 MT/Annum capacity of Asbestos Cement Sheet Plant and 2 Lakh MT/Annum capacity of Asbestos Grinding Plant at Industrial Area, Bihia. The total project area is 20 acres and land is allotted by BIADA on lease for 90 years. On 10th May, 2010, the project was discussed by the Experts Appraisal Committee (EAC), Industry. In the minutes of the EAC, there explicit reference to "Health Management Plan for Mesothalimoa, Lung cancer and Asbestosis related problems in asbestos industries".

The Executive Director (Industries), Govt. of Bihar has issued a certificate vide letter no. 3168/D/135/DO/ BIADA/09 dated 10th May, 2010 indicating location of the project in notified industrial area Bihiya. No reserve forests is located within 10 Km. Total cost of the project is Rs. 30 Crores (as mentioned in the minutes of EAC). The Bihar'S State Investment Promotion Board (SIPB) cleared it on 23rd November, 2009. Here its total investment is mentioned as Rs 60.20 crore.

The Giddha plant is being set up by Chennai based Nibhi Industries Pvt. Ltd. It plans to establish the One Lakh MT Capacity Asbestos Fiber Cement Corrugated Sheet, Flat Sheet and Accessories and Light Weight Fly Ash Block Plant at Industrial Growth Centre, Giddha, Ara. This has been approved in SIPB meeting on 19th October, 2009. The total investment for the plant is Rs 31 crore.

The Press Meet drew the attention of the media persons towards the fact that 55 countries have banned the use of all forms of asbestos including chrysotile (white asbestos) and how the Kerala State Human Rights Commission considered the problem created by asbestos and directed that the use of asbestos for roofing the school buildings should be stopped and they should be replaced with country tiles. The Kerala State Human Rights Commission, while giving these directions, had considered the judgment of the Supreme Court. Even National Human Rights Commission (NHRC) has passed an order in Case No:693/30/97-98 recommending that the asbestos sheets roofing. The recent Supreme Court order dated 21st January, 2011 takes cognizance of the Ban White Asbestos Bill in the Rajya Sabha.

In its order Supreme Court’s bench of Chief Justice of India Justice S.H. Kapadia, Justice K.S. Panicker Radhakrishnan and Justice Swatanter Kumar observed in para 15, “the Government has already presented the Bill in Rajya Sabha. The statement of objects and reasons of this Bill specifically notices that the white asbestos is highly carcinogenic and it has been so reported by the World Health Organisation. In India, it is imported without any restriction while even its domestic use is not preferred by the exporting countries.”

It further notes, “Canada and Russia are the biggest exporters of white asbestos. In 2007, Canada exported 95% of the white asbestos, it mined out of which 43% was shipped to India. In view of these facts, there is an urgent need for a total ban on the import and use of white asbestos and promote the use of alternative materials. The Bill is yet to be passed but it is clearly demonstrated that the Government is required to take effective steps to prevent hazardous impact of use of asbestos.” In the light of the above, BANI contends that the misinformation campaign has been demolished by the apex court’s order. It has drawn the attention of the Bhojpur Administration towards these facts which necessitated immediate stoppage of work at factory sites in Giddha and Bihiya.

The order of the Chief Minister’s Secretariat dated 15th February is attached. Also attached is the petition submitted to the DM dated 3rd February and 24th February. 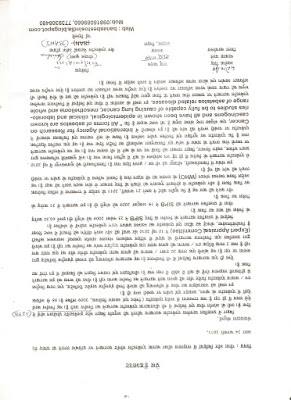