Subject: Questionable recommendation for use of asbestos sheets by Bihar Fire Service despite govt's assurance 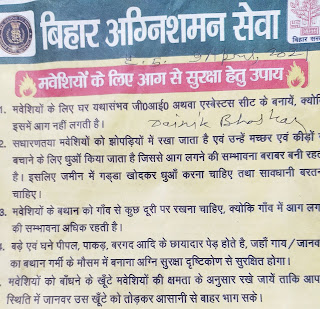 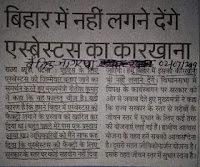 With due respect this is to draw your attention towards the attached advertisement of Bihar Fire Service dated 09/04/2021 in Dainik Bhaskar which recommends use of asbestos sheets for cattle houses contrary to your assurance in the State Assembly.

After a successful struggle against proposed asbestos based factories they have been stopped in the districts of 1) Muzaffarpur, 2) Vaishali, 3) Madhubani, 4) West Champaran and 5) Giddha, Koelwar, Bhojpur in Bihar. These unsuccessful proposals were made by 1) West Bengal based Utkal Balmukund Cement & Roofings Ltd, 2) Bengal based Utkal Asbestos Industries Ltd, 3) Rajasthan based A Infrastructure Ltd, 4) Telangana based Hyderabad Industries Ltd, 5) Tamil Nadu based Nibhi Industries Private Limited.

We submit that Bihar is the first state India where almost all asbestos factories were stopped following your intervention.

We submit that questions were raised regarding these plants in Bihar State Assembly and Bihar Legislative Council. One unit of Tamil Nadu based Nibhi lndustries Private Limited which was set up in Koilwar block of Bhojpur district has been stopped on environmental grounds by Bihar State Pollution Control Board (BSPCB). Nibhi's repeated efforts to get relief from Patna High Court failed because the State Government supported the stance of BSPCB in the Court. But the factory and its asbestos waste continue to rot in the factory premises located immediately adjacent to an educational Institution. The company was allotted 15 acres. The task of removal of asbestos waste and the decontamination of the site remains incomplete.

Your assurance in the State Assembly in July 2019 that no new asbestos based factories will be allowed in the state has been welcomed widely but Bihar Fire Service Department has published advertisement in several newspapers on April 9, 2021 recommending use of asbestos sheet for cattle houses unmindful of WHO's recommendation seeking elimination of all kinds of asbestos.

Let me take the opportunity to submit that d despite your assurance two units of asbestos based factories of Tamil Nadu based Ramco Industries Limited continue to operate with permission for one unit A 120,000 MT Annum capacity Asbestos Cement Sheet Plant and 200,000 MT capacity Asbestos Grinding Plant exists in Bihiya Block of Bhojpur adjacent to a temple amidst several villages and agricultural fields. Ramco's one unit was allotted 20 acres by the state government on lease for 90 years. In a significant development, even the Chairman of Bihar Legislative Council expressed his disapproval of these factories in Bhojpur which he referred to as "cancer factories".

Recalling lessons from the world's worst industrial disaster of Bhopal which happened in December 1984. Hon'ble Patna High Court has underlined in its order the inconsistency in the continued existence of these factories in Bhojpur wondering as to how it that poisonous plants which have rightly been recognized as hazardous Muzaffarpur, Vaishali, West Champaran and Madhubani becomes non-poisonous in Bihiya, Bhojpur? How can the human body of the residents of Bihiya, Bhojpur be immune to the hazards asbestos fibbers?

Taking a consistent position against these asbestos plants and pursuant to complain against the company, Shri Vivek Kumar Singh, Chairman  Bihar State Pollution Control Board (BSPCB) cancelled the Non-Objection Certificates (NOCs) given to the hazardous enterprise of Ramo company Under Water(Prevention and Control of Pollution) Act, 1974, Air (Prevention and Control of Pollution) Act, 1981 and rules 3 (1) Schedule 1 of Hazardous Waste (Management, Handling and Transboundary Movement) Rules under Environment (Protection) Act 1986 which deals with hazardous wastes generated during the production of asbestos or asbestos-containing materials including asbestos-containing residues, discarded asbestos and dust/particulates from exhaust gas treatment.

Following the cancellation of NOCs, the company approached the Appellate Authority to appeal against the cancellation. At the of their appeal the Appellate Authority happened to be same Vivek Kumar Singh himself who as Chairman, Bihar State Pollution Control Board (BSPCB) had canceled their NOCs. The company used this manifest violation of the principle of natural justice as a ground to seek relief from the Patna High Court and got it. Instead of confirming its order asking the state government to rectify the error by appointing a person as Appellate Authority in compliance with the principle of natural justice and unmindful of the fact that the fact of violation of environmental laws has not been disputed, the High Court allowed the company to operate its plant. Meanwhile, Appellate Authority has been changed and now the Hon'ble High Court has asked the new Chairman, Bihar State Pollution Control Board to act after examining the complaint against it.

In view of the above, kindly advise Bihar Fire Service, the BSPCB and the Appellate Authority to take remedial measures. Bihar Fire Service may be asked to issue another advertisement on hazards of asbestos according to the WHO. The decision process can be expedited by BSPCB easily by setting matters right by restoring its earlier order by asking the Appellate Authority to hear the appeal and decide the matter to safeguard public health and ensure environmental justice. If we manage to get relief in the case, it will set a good precedent.

We will be happy to share more information in this regard.