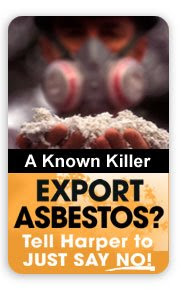 The purpose of the U.N. Rotterdam Convention is to protect life and the environment by controlling trade in hazardous chemicals and pesticides.Now that these dangerous products, such as abestos, are being controlled or banned in the industrialized world, companies are aggressively targeting developing countries and the countries of Eastern Europe for expanded sales and increased profits.Although most Canadians do not know this, our government has been a world leader in sabotaging the Rotterdam Convention.In a 24 hour period, grass-roots groups from around the world signed the challenge below, calling on Canada and its handful of allies to stop sabotaging the Convention and put human life and the environment first.Please support them. If you haven’t already done so, send the letter to Prime Minister Harper calling for Canada to support the Rotterdam Convention and the World Health Organization call for a ban on asbestos.

In human solidarity and with gratitude to you,

GLOBAL CAMPAIGN LAUNCHED
TO SAVE THE ROTTERDAM CONVENTION

U.N. Environmental Convention is being killed by political
and industry interference, say groups

2008 is the 10th anniversary of the adoption of the Rotterdam Convention, whose purpose is to protect human health and the environment by controlling international trade in hazardous chemicals and pesticides.

But instead of celebrating, a number of environmental, labour and health groups are sounding the alarm.

Industry interference and political sabotage by a handful of countries, led by Canada, are strangling the Rotterdam Convention, say the groups from Asia, Africa, South and North America, and Europe.

Because of this interference, action to implement the Convention has been obstructed and the groups are concerned that progress at meetings planned for this year will likewise be blocked.

Under the Convention, an expert body, called the Chemical Review Committee, recommends whether a hazardous product has met the criteria of the Convention and should be placed on a special list which requires countries to obtain Prior Informed Consent before they can export the product to another country.

The Convention, which has been ratified by 120 countries, came into effect in February 2004.

At its last meeting in 2006, over one hundred countries approved the recommendation made by the Chemical Review Committee that chrysotile asbestos be listed for Prior Informed Consent. But Canada, together with Kyrgyzstan, India, Iran, Peru and Ukraine, simply refused to let the Convention’s process work and blocked action on the recommendation.

They were supported by Zimbabwe, Russia and Indonesia, who have not ratified the Convention.

Canada argued that unless every single country agrees, no action should be taken to implement the Convention. “This is a death sentence for the Convention,” said Joan Kuyek of Mining Watch Canada.

The World Health Organization and the International Labour Organizations, among others, have called for chrysotile asbestos to be banned. Most industrialized countries have banned it. Asbestos companies are therefore aggressively targeting developing countries and the countries of Eastern Europe for expanded sales.

“If chrysotile asbestos, a known deadly carcinogen, which fully met all the requirements of the Convention can be prevented from being listed, then the Convention is in grave peril,” said Laurie Kazan-Allen of the Ban Asbestos International Secretariat.

“Industry interference is killing the Convention,” said Kathleen Ruff of RightOnCanada. “Countries allied to the asbestos industry are putting the profits of the industry ahead of the lives of people.”

“Industry is giving false information on chrysotile asbestos in the Eastern European and Central Asian countries, pretending that their local asbestos does not have the proven negative health effects. We have bought a few samples of asbestos on local markets, and the product is exactly the same as the asbestos which has been banned in most of the industrialized nations. We are very worried about the health of labourers in the building sector, and especially for children, as the asbestos is being used in public buildings like daycare centers and schools”, says Sascha Gabizon, executive director of Women in Europe for a Common Future.

“At the March 10-13 meeting of the Convention’s Chemical Review Committee, taking place in Geneva right now, sixteen representatives from the chemical industry and, in particular, lobbyists for the asbestos industry will be attending as official observers,” noted Laurie Kazan-Allen. “Given the history of industry interference, this is extremely disturbing.”

We are calling for a stop to industry interference in a Convention meant to protect health and the environment, say the groups.

We are, in particular, challenging Canada, Kyrgyzstan, India, Kazakhstan, Iran, Peru and Ukraine, as well as Russia, Zimbabwe and Indonesia (who have not signed the Convention) to stop their irresponsible conduct.

Our message to them is – Stop the sabotage. Let the Convention do its job of protecting lives.

Ban Asbestos Canada (BAC) applauds the NDP's support for the World Health organization's call for action to eliminate asbestos disease and asbestos use around the world.

“This is the first Canadian parliamentary party to take a stand against asbestos,” said Larry Stoffman, executive member of BAC and Chair of the National Committee on Occupational and Environmental Exposures. “Canada is one of the few industrialized countries who have continued to mine and export asbestos while rejecting the call of all independent, recognized scientific organizations around the world to ban all forms of asbestos.”

BAC is a national coalition of labour, health, and environmental groups that are dedicated to banning asbestos in Canada, ensuring compensation for all affected Canadian workers, and to promoting international conventions aimed at controlling the international trade in hazardous substances, such as asbestos.

“We look forward to working with the NDP to ensure both real economic support for laid off asbestos workers and a comprehensive campaign for just compensation for thousands of Canadian workers afflicted with asbestos caused disease,” said Wayne Peppard, Executive Director of the BC & Yukon Construction Building Trades Council. “Government support for this dying industry that has exploited Quebec workers must stop now."

"From a public health point of view, the NDP's support for the WHO's position is, in our view, the only possible responsible position," stated Micheline Marier of the Association of Asbestos Victims of Quebec.

"The population in the Asbestos region has paid a heavy price since the beginning of mining this mineral and we call on governments to assist in the revitalization of the region, as well as the environmental clean-up of the former asbestos mines," said Marier.

“This carnage from asbestos related fatalities is disastrous for those workers and their families,” Peppard said. “It’s long past time that the Canadian government stop the production and use of asbestos”.

Canada exports over 95% of its asbestos to developing countries and has continually undermined any attempt to have asbestos banned or labeled as a dangerous product.

Ban Asbestos Network of India (BANI) is a founder member of Ban Asbestos Canada. n
Posted by mediavigil at 8:39 AM