Kerala to Consider Ban on Asbestos? 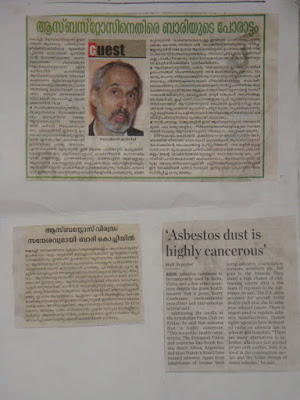 Kerala Labor Minister, P K Gurudasan has been positive about the idea of doing something in his state with regard to making it asbestos free. He was speaking to Dr Barry Castleman, a well known authority on asbestos issue. Dr Castleman held press conferences to highlight the necessity of banning of asbestos in India during his recent visit to Kerala.

Public health researchers have warned that the harmful and deadly effects that asbestos fibres may cause have been seriously underestimated in India.

NEW DELHI: Environmentalists here have accused the asbestos industry of having launched a “misinformation campaign” in newspapers.

“We will be registering a complaint with the Press Council of India and the Advertising Standards Council of India against this campaign to ensure that the common man does not get influenced and is aware of the dangers of using asbestos,” said Gopal Krishna of Ban Asbestos Network of India (BANI).

He added that the advertisements were against all ethics as it does not talk about the dangers associated with asbestos use.

We have been campaigning against use of asbestoses and trying to ensure that there is enough awareness about it. While we can’t stop people from advertising we can ensure that the common man knows about the ill-effects of asbestoses,” noted a release issued by the group.

The Union Government is yet to issue a complete ban on use of asbestoses in the country but some Sates have taken a proactive stand against asbestoses. “Even the International Agency for Research on Cancer reconfirmed that all commercial asbestos fibres cause lung cancer and mesothelioma.”