Asbestos Trader, Roshi Chadha, sits on Board of Governors of the Canadian Red Cross

Roshi Chadha is a member of the Board of Governors of the Canadian Red Cross. She is also an asbestos exporter.

Since 1981, she has been an executive of Seja Trade Ltd., a Montreal company that has for years been exporting asbestos from the open-pit Jeffrey asbestos mine in Quebec to India. Her husband, Baljit Singh Chadha, who is seeking to revive the dying Quebec asbestos industry, is 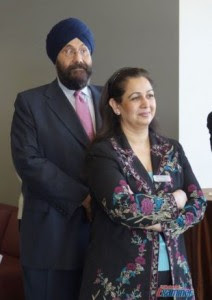 The Jeffrey open-pit mine has closed down, but Baljit Chadha is lobbying the Quebec government for a $58 million loan guarantee in order to open a new underground Jeffrey mine, which would export of millions of tonnes of asbestos to Asia for the next 25 to 50 years. He states that his project will be financially profitable.

The mandate of the Canadian Red Cross, however, is to promote human health, not financial profits. On its website, the Red Cross states that “All Red Cross programs and activities are guided by the fundamental principles of humanity, impartiality, neutrality, independence, voluntary service, unity and universality. These principles allow us to provide help immediately to whoever needs it, wherever they are, whatever their race, political beliefs, religion, social status or culture. We are a leading humanitarian organization through which people voluntarily demonstrate their caring for others in need.”

As an asbestos exporter, Roshi Chadha is violating the values and standards of the Red Cross. She is contributing to harming people overseas and contributing to a double standard under which asbestos is being removed from schools in Canada to protect Canadian children, while being placed in schools in India, where there are no safety protections and children will be exposed to asbestos harm.

When the Red Cross is involved in relief efforts after a natural disaster, such as the earthquake in Indonesia, asbestos-contaminated rubble is an additional health risk threatening survivors and Red Cross relief workers. For this reason, the World Bank has stated that no asbestos should be used in regions prone to earthquakes and other natural disasters.

At St Mary’s Hospital, she has championed the Chrysalis program, which links “women who share a belief that Knowledge is Power and pivotal to the decision-making process regarding health-related issues through regular seminars with leading medical practitioners.”

But when it comes to the asbestos she exports, Roshi Chadha has a different standard and refuses to heed reputable medical information. The Canadian Medical Association, the Canadian Cancer Society, the Canadian Public Health Association, the Quebec government’s own sixteen Directors of Public Health, as well as numerous other medical authorities, have strongly and unanimously called for the export of asbestos to end and have opposed the re-opening of the Jeffrey mine, saying that asbestos from the mine would lead to loss of life.

Roshi Chadha’s role in exporting asbestos as an executive of Seja Trade Ltd is in direct conflict with her role as a board member of the Canadian Red Cross, St Mary’s Hospital Foundation and the McGill University Health Centre.

Asbestos victims have written to Roshi Chadha and to the Canadian Red Cross, St Mary’s Hospital Foundation and the McGill University Health Centre, asking that she support health and stop exporting asbestos harm or that otherwise she be asked to resign. To date, they have received no reply.