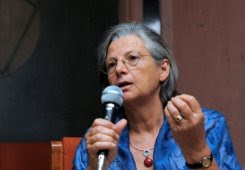 Annie Thebaud-Mony, director of research at France's National Institute for Health and Medical Research, delivers a lecture on "Asbestos Hazards and People's Struggle World Over" in India in 2011. Thebaud-Mony has refused France's highest honour in protest at official inaction over what she described as "industrial crimes" in this sector

AFP - A top researcher and campaigner on industrial health issues has refused France's highest honour in protest at official inaction over what she described as "industrial crimes" in this sector.

Annie Thebaud-Mony, director of research at France's National Institute for Health and Medical Research, turned down the "Legion d'Honneur" in a letter to Housing Minister Cecile Duflot made public on Saturday.

Thebaud-Mony has written award-winning books on industrial health and is the spokeswoman for Ban Asbestos France.

In her letter, she said she wanted to "challenge the impunity that until now has protected those who carry out industrial crimes".

Thebaud-Mony said she was particularly concerned that the current economic crisis was eclipsing issues concerning workers' health and the environment.

"My act is intended as a call for citizens, but also for parliament to act, for the respect of basic rights to life, health and dignity," she said in her letter to the ministry, dated July 31.

"We want to be taken seriously when we expose the deterioration of working conditions ... the drama of workplace accidents and occupational diseases...," she added.

She denounced what she said was a misguided debate over the issue of safe levels of certain toxic substances.

Public officials have to take a stand against the threat that these substances pose, if necessary taking legal action against the offenders, she argued.

Thebaud-Mony said that her own career had suffered for years because of her work.

She called on the government to secure the jobs of young researchers working in the field of industrial health, in particular those investigating cancer-causing materials in the workplace.

http://www.france24.com/en/20120805-top-researcher-snubs-french-honour-over-industrial-crimes
Posted by Krishna at 7:48 PM

But in a country like India monitoring, regulation and safety norms are not what they should be. So hundreds of workers in factories using asbestos are dangerously exposed to its harmful effects. These workers often have no other means and are not unionized therefore face the long term exposure risks you are talking about. Unlike Asbestos Testing in Toronto have been trusted for over 33 years in their services. Handling asbestos removals

Unfortunately, there are several of these fraudulent companies who claim to be able to remove asbestos cheaper than others. However, this can mean that they are not doing it properly, completely and safely. I've heard about www.ASBESTOSREMOVALMONTREALQC.COM providing expert application with professional methods and quality tools and products on asbestos removal.I think it's one of the importance home owners would consider.

Asbestos banned from most construction materials unless properly labeled, older homes and commercial buildings may still contain materials with asbestos fibers. If remodeling an older home, it's important to have the home tested for asbestos before starting any renovation projects. Click Here For a FREE Estimate Asbestos Removal in San Antonio