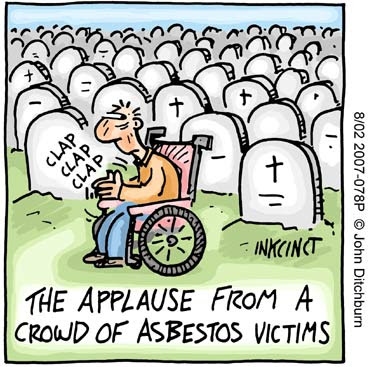 Credibility of National Institute of Occupational Health (NIOH) under shadow

Note: Asbestos Roofs deteriorate, the asbestos surface accumulates Lichen. Over the period of time the Lichen affects the Asbestos Sheets, causing the surface to be unstable, allowing asbestos fibres to become airbourne. Government, industry and now the institutions like NIOH, Ahmedabad and Industrial Toxicology Research Centre, Lucknow will have citizens believe that these airborne fibers can be controlled and used safely in India although 45 countries have failed to do so and have banned it.

New Delhi, Feb. 6: The ministry of chemicals and fertilisers is attempting to tamper with a study on the safety of white asbestos, a material widely used in India but banned by 40 countries because of health hazards, environmental groups have alleged.

Using documents retrieved under the Right to Information Act, the Ban Asbestos Network of India (BANI) and other groups have claimed that the ministry is trying to influence the study to maintain its position that asbestos should continue to be used in India.

Over 90 per cent of the material is used in asbestos-cement pipes, flat sheets and corrugated roofing sheets. The rest goes into brake linings, pads and industrial gloves. India has about 30 companies producing asbestos materials.

“The ministry of chemicals and fertilisers is colluding with the asbestos industry to influence the findings of safety studies,” said Madhumita Dutta, an environmental activist based in Chennai who had filed the application under RTI seeking study documents.

A senior official in the ministry involved in a review of the study declined to respond to the allegations.

The ministry had asked the National Institute of Occupational Health (NIOH), Ahmedabad, to conduct a study on the health hazards of asbestos by examining workers in the asbestos industry.

But the findings are being vetted by the ministry as well as industry representatives before they are either peer-reviewed by independent scientists or made public, Dutta said.

In an asbestos company in Calcutta, the NIOH reported 32 per cent lung abnormalities among a set of workers. But the institute was asked to justify the abnormalities and indicate whether they are because of asbestos or from other factors.

At a meeting on April 14, 2007, a review committee set up by the ministry had decided the report “will be finalised after due discussions with the asbestos industry”.

The committee also said the report “will specifically indicate as to how technology has made working conditions better... and include relevant photographs showing protective measures undertaken”.

“The ministry wants to influence the findings of this study to shape domestic policy on asbestos,” said Gopal Krishna, an activist with the Ban Asbestos Network of India.

India uses tens of thousands of tonnes of asbestos annually, most of it imported from Canada or Russia. Medical studies suggest that many years of exposure to asbestos dust can cause life-threatening lung disease. Public health organisations have long been urging the government to ban asbestos.

But industry organisations have been campaigning to highlight the advantages of asbestos products and asserting that well-managed use of asbestos does not pose health hazards.

It very sorry state that the institution like NIOH has gone into the hands of Asbsetos Pro Lobby. World Wide its a know fact that asbestos in any form either its controlled use or uncontrolled use has been know to cause cancer. Everyone know that that cancer will be know only after 15 to 20 yrs. So the goverment is taking it easy on Banning Asbestos but nobody in the goverment think for the future in which goverment has to spent billions of $ in treating asbestos related cancer which some one in the goverment should think.