The Minister for Mines Sis Ram Ola announced the details of the National Mineral Policy on April 10, 2008 revealing quite unambiguously that India continues to use both Amphibole and Chrysotile varieties of Asbestos ignoring the toll it takes on national health. 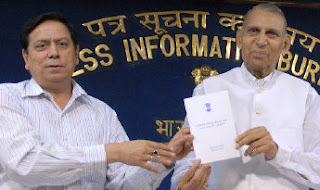 World over, asbestos-based multinational corporations are all in bankruptcy proceedings and/or shifting to other businesses but this policy shows how Indian government has adopted a considered Ostrich policy in face of indisputable evidence about the havoc from asbestos consumption. Unmindful of the ongoing to global momentum to ban this mineral, asbestos cancer epidemic in India is a story of monumental failure to protect the public health. The callousness that is manifest in the National Mineral Policy towards occupational and public health is unpardonable.

Ban Asbestos Network of India (BANI) finds such governmental patronage to asbestos mining and manufacturing industry of all ilk quite alarming in view of its obstinate refusal of the government to prevent even preventable cancers from this killer mineral fiber. This tantamounts to policymaking that is manifestly anti-national in character since it illustrates complete disregard for citizen’s health. The government is pretending ignorance about the disturbing developments in countries like France where asbestos had been a "health catastrophe" as it is responsible for an estimated 2,000 deaths annually. In US, the death rate is 10, 000 annually.

Asbestos is one of the most pervasive environmental hazards in the world, present in more than 3,000 manufactured products. The asbestos cancer epidemic is largely preventable if the Ministry of Mines & Minerals, Commerce Ministry and Health Ministry act urgently, early and responsibly by acknowledging that in addition to other asbestos related diseases, 5-7% of all lung cancers can be attributed to occupational exposures to asbestos.

All forms of asbestos including amphibole and chrysotile variety cause four health disorders. Asbestosis results in stiffening of the lung, and has resulted in the deaths of many miners. Lung cancer has a higher incidence in miners who also smoke, with the chance of developing cancer roughly proportional to the amount smoked. Asbestos-induced cancer is found only rarely in nonsmokers. Among the various type of asbestos, chrysotile workers have the lowest incidence of cancer. Mesothelioma involves the development of a fatal tumor. The time between diagnosis and original exposure is commonly 30 years or more.

Among the general population, 70-80% of all mesothelioma cases are caused by exposure to asbestos. A staggering 18% of all mortalities in crocidolite workers are the result of mesothelioma. Asbestos exposure affects not only asbestos workers but also their families, users of asbestos products, and the public as it is exposed to building materials and asbestos in heating and ventilating systems. In India, where protection of workers and communities is scant or nonexistent, the asbestos cancer epidemic may be even more devastating than it has been in developed countries like US, Europe, Australia, Japan & others. The battle against asbestos is in danger of being lost where the human costs may be greatest, in countries like India that is desperate for industry.

According to a recent paper "Monitoring and identification of airborne asbestos in unorganized sectors, India" (Qamar Rahman et al Volume 68, Chemosphere journal), unorganized asbestos units particularly mills showed unhealthy occupational. In another recent paper in Environmental Health Perspectives, a US journal published by National Institute of Environmental Health Sciences notes that besides workers and consumers, “Family members of asbestos workers are at increased risk of malignant mesothelioma.” Dr Qamar Rahman, a senior scientist formerly with ITRC, and Dean, Research & Development, Integral University, Lucknow who did the research says that on the basis of the report and recent studies conducted in the milling units, the ban on asbestos mining should not be lifted. Dr Rahman said in her comments to the central government on a report regarding lifting the ban on asbestos mining.

The Minister of Mines pronounced the revision of royalty rates and dead rent of minerals in the National Mineral Policy. The main highlights of the revised rates with regard to asbestos is that royalty rates for minerals like amphibole asbestos is going to be shifted from tonnage basis system of royalty to ad valorem basis in a business as usual fashion. In choosing to do so it ignores sane suggestions in the same way as it has ignored the plight of victims of white asbestos mines in Roro Hills, Chaibasa, Jharkhand abandoned by Hyderabad Asbestos Cement Products Limited (now known as Hyderabad Industries Limited). It is noteworthy that Rajasthan produces asbestos in the country despite repeated statements in the parliament stating that asbestos mining remains banned in India so far. The asbestos that is mined is processed there in unorganized sectors including milling and manufacturing of asbestos-based products.

BANI condemns the National Mineral Policy that paves the way for lifting the existing ban on asbestos mining by ignoring the views of exposure victims, trade unions and citizen groups besides the informed recommendations of public sector medical experts, and mounting evidence of an asbestos disease epidemic. The rationale to permit asbestos mining is manifestly hollow.


Note: Sadly, the Minister who hails from Rajasthan is taking his native state towards he Jharkhand way by exposing workers and communities to asbestos. Incidentally, the proprietors of CK Birla group of industries that own Hyderabad Industries Limited also hail from Rajasthan. The Minister, Sis Ram Ola represents Jhunjhunu constituency of Rajasthan and is a member of the Indian National Congress.
Posted by mediavigil at 4:57 AM