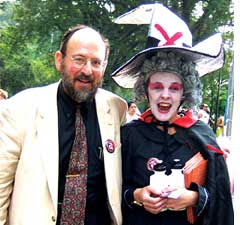 (In the picture: A professor and an ‘Asbestos witch’: protesters in Sao Paulo, Brazil)


PRODUCERS of chrysotile asbestos, India, Russia and Canada, will again try to scuttle any controls over the mineral under the Rotterdam Convention that allows countries to monitor and control trade and use of hazardous chemicals.

Conference of parties (CoP-4) to the Rotterdam Convention on the Prior Informed Consent (PIC) procedure will be held in October-end in Rome. In the earlier three meetings, India had opposed inclusion of chrysotile asbestos on the pic list of hazardous chemicals.

The government claims there is not enough scientific evidence to prove asbestos-related afflictions, though asbestos is known to cause cancer and asbestosis, a chronic respiratory disease.

To build up support for controls on chrysolite asbestos, the International Ban Asbestos Secretariat (IBAS), an independent ngo working for a worldwide ban on asbestos and justice for its victims, released a dossier, India’s Asbestos Time Bomb, on September 25.


The dossier is authored by Indian and international scientists. “During CoP-4, the issue of including chrysolite asbestos in the pic list will come up, and we fear the Indian government will again play dirty and oppose its listing. In this monograph we have put together all scientific evidence to build up a case against chrysolite asbestos," said Madhumita Dutta of Chennai-based campaign group Corporate Accountability Desk.

According to the dossier, between 1960 and 2006, 6.7 million tonnes of asbestos was used in India. It claims that the asbestos industry in the country has gone scot-free, while thousands of workers are suffering. “India’s asbestos industry is worth Rs 3,000 crore. Its might can be gauged from the fact that in spite of 50 countries banning the use, manufacture and trade in asbestos, the Indian government continues to support it," said Gopal Krishna, coordinator of the Ban Asbestos Network of India, a group of health, environment and labour activists.

The government has not taken any action against asbestos use because politicians own most asbestos mines, allege activists. Rather in September 2007, India, along with Russia and Canada, blocked proposals to control the movement of asbestos wastes being considered by a working group of the Basel Convention, a treaty on control of hazardous waste movement across international borders. The Indian delegate argued that more research was needed before declaring chrysolite asbestos a hazardous substance.

Qamar Rahman, dean of Research and Development at the Integral University, Lucknow, along with the Central Pollution Control Board, carried out a study on asbestos effects in Rajasthan and Maharashtra in 2001-02. She found that 21 per cent workers in the unorganized sector had asbestosis. In the organized sector, 26 per cent of the workers had the disease, Rahman said in her paper that is a part of the dossier. The figures remain the same even now, she added.

“The Indian government rather engaged in a 'scientific' hogwash by hiring Ahmedabad-based National Institute of Occupational Health (NIOH) to study the health impacts of chrysolite asbestos on workers,” alleges the report. The Rs 60 lakh study is being partially funded by the Indian asbestos industry and its representatives are part of the review committee of the study.

“The NIOH study is designed to hoodwink the international community. The scientific community, along with the Indian government, is to be blamed for turning a blind eye towards the problem. Most doctors also do not try to find out the history of patients suffering from mesothelioma, a type of cancer caused due to exposure to asbestos. There is no safe limit of asbestos exposure,” said S R Kamat, a retired professor of respiratory medicine at KEM Hospital, Mumbai.

V Murlidhar, founder member of the Mumbai-based Occupational Health and Safety Centre, a medical officer on a un Mission in Iraq, explained how the Indian medical community colluded with the asbestos industry by misreporting asbestosis cases as tuberculosis. He alleged that premier research institutions undertake several studies on asbestosis but the results are never made public. Added Prahlad Malwadkas, Murlidhar's colleague: “Asbestos patients are fighting a legal battle for compensation in the Bombay Labour Court and it may take years before they receive even a penny.” The industry even manipulates court hearings, he alleged. “To prove that a person is an asbestosis patient, the certifying doctor needs to depose before the court. But for months Murlidhar did not get a chance to depose before the court. Every time he came back from Iraq for a court hearing, the hearing got deferred.”