Note: R.H. Khwaja, Additional Secretary, Ministry of Environment & Forests has betrayed the Indians and compromised their health to protect asbestos industry at the UN meeting of the Rotterdam Convention on the Prior Informed Consent (PIC) Procedure for Certain Hazardous Chemicals and Pesticides in International Trade in Rome. 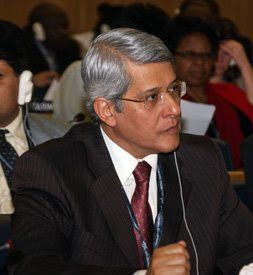 As an act of manifest sophistry and insincerity, Khwaja, argued strategies for global chemicals management must respect nations’ sovereign right to use chemicals for the national good, taking into account both socio-economic and environmental concerns..

Supporters of corporate barbarism like Russia, India, Pakistan and Canada compelled the UN conference TO miss the opportunity to list chrysotile (white) asbestos for the fourth time.

Public interests groups have emphasized that the Convention is about protecting health and the environment, not trade. Being a Convention about hazardous chemicals trade, it is in the nature of the traders to move in minimal steps with criminal callousness. 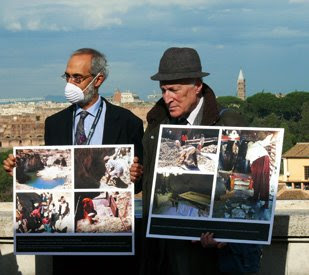 Barry Castleman & members of the Rotterdam Convention Alliance (ROCA) demonstrated at the FAO rooftop to raise awareness on the banning of chrysotile asbestos. (Photos courtesy: ROCA)

NEW DELHI: Reacting to the “anti-worker and anti-science” position of few “reckless governments” that has created a stalemate for the U.N. hazardous chemicals treaty, the Ban Asbestos Network of India (BANI) has accused Canadian, Russian and Indian governments of turning a blind eye towards the poisonous atmosphere around the asbestos factories and the dangers it poses to the health and life of citizens. This was being done just to pander to the industry’s hunger for profit at human cost, it said.

“The Indian government has betrayed the public interest by taking an unpardonable position that endangers each and every citizen of the country at the fourth meeting of the Conference of the Parties (COP-4) of the U.N.’s Rotterdam Convention on the Prior Informed Consent Procedure (PIC) for Certain Hazardous Chemicals and Pesticides in International Trade in Rome,” a statement issued by BANI said here.

As a consequence, the hazardous chemicals treaty faces deadlock in the Rome meeting. A very important proposal was placed to wriggle out of the situation where chemicals that meet the Convention’s criteria but on which the COP fails to reach consensus about listing in Annex III as has happened in the case of chrystolite asbestos aend endosulphan. Chemical and chrystolite asbestos industries and countries like India, Russia and Canada are opposed to the inclusion of these chemicals in the list although they meet the criteria to be listed as hazardous chemical. Fearing certain defeat, Canada stated that introducing voting for Annex III would create a dual system that could weaken the Convention. The Indian government took an untenable position at a U.N. meeting in Rome by opposing the inclusion of chrystolite asbestos in the U.N.’s hazardous chemical list under the “influence” of asbestos industry and Canadian and Russian governments. A number of countries, including some that continue to mine and export chrystolite asbestos, blocked its addition to the PIC list when the Parties to the Convention last met in 2006 and further opposition is expected at next week’s meeting, according to the Food and Agriculture Organisation (FAO).

India is the largest importer and consumer of Canadian and Russian asbestos to the detriment of its citizens and workers.

When the matter came up for discussion on October 28, head of the Indian delegation R.H. Khawaja, Additional Secretary, Ministry of Environment opposed the listing of chrystolite asbestos and endosulphan in the PIC list for hazardous chemicals and pesticides.

Try not to burn through your time in getting Dwarka accompanies

Get Services: Call Girls in Dwarka


Phenomenal Lavish escorts administration in Gurgaon on your offer

Go With: Escorts in Gurgaon

Go With: Call Girls in Haridwar