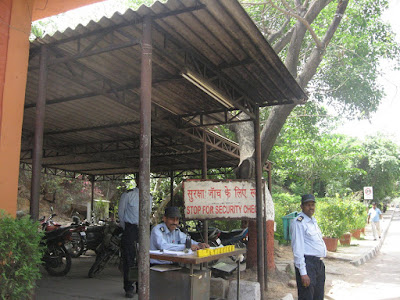 (Security check up under asbestos roof in Jawaharlal Nehru University, New Delhi)
India continues to import the asbestos toxic mineral primarily from Canada and Russia although over 50 countries around the world have banned it. In 2008, Canada exported $77 million worth of asbestos; 43% of it went to India. Asbestos is is mixed with cement and used to create infrastructure like pipes, brakes, and rooftops etc.

At least since 1984, the Canadian asbestos industry created the Chrysotile Institute (previously known as Asbestos Institute) and Canadian government has contributed more than $19 million to the institute for the promotion of this killer fiber by legitimizing bad science manufactured at the behest of the industry.

Pat Martin, Winnipeg Member of Parliament, attempted to make the House of Commons, Canada declare April Fools Day (April 1) an asbestos awareness day for asbestos-related diseases because Canadian government has misled the world for quite a while. “We’ve fooled the world with phony science for too long,” Martin said. As a youth Martin spent two years mining asbestos in the Yukon. At the time, he was completely unaware that the effects from working in such an environment could be fatal. Currently, Canada is exporting more than 200,000 tons of asbestos each year. In 2005, 61 percent of occupational fatalities in Canada were the result of asbestos exposure, totaling 340 people.

The Canadian Cancer Society fully supported Martin in his efforts in asking the Canadian Prime Minister Stephen Harper to set a timeline for phasing out the use and export of Canada’s chrysotile asbestos. The Canadian Cancer Society said, “We are stating factually that all forms of asbestos cause cancer.” The last remaining active asbestos mine in Canada is located in Quebec, which exports 90 percent of all the asbestos that it produces.
Posted by mediavigil at 10:54 PM