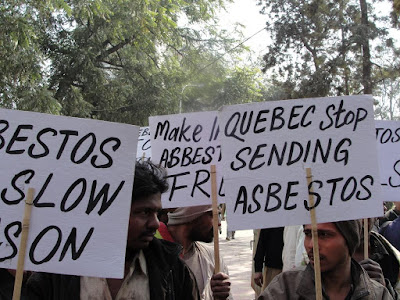 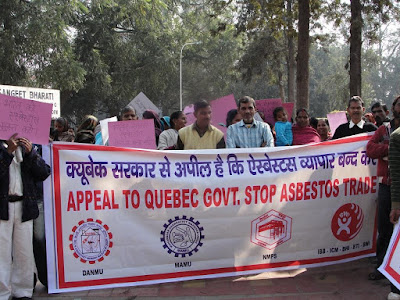 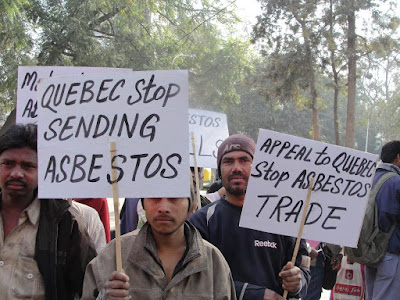 Trade unions, human rights activists and workers today demonstrated in front of FICCI House and called upon the governments of India and Canada to halt the trade in white asbestos. They urged them to invest instead in addressing the occupational and safety concerns of workers and consumers using asbestos and ensuring compensation to all harmed by asbestos.

A joint letter was also sent to Dr. Manmohan Singh by AICCTU, AITUC, TUCC, NTUI and BANI calling upon him to immediately Ban Asbestos and ensure passage of the White Asbestos (Ban on Use and Import) Bill 2009 pending in Parliament.

At the press conference today speakers from several organisations called upon Dr. Manmohan Singh, Prime Minister of India and Mr. Charest visiting premier (chief minister) of Quebec to stand up to the powerful asbestos industry in both countries which is spending millions of dollars to intimidate and silence workers, doctors, scientists and activists from articulating a truth that has been gathered over 300 years by medical experts and scientists, namely – that asbestos kills! There is no safe use of asbestos!

Mr Charest STOP! this hypocrisy
Trade unions and human rights activists sent a message to Mr. Charest to stop shipping chrysotile asbestos to India when his own government is spending millions of dollars to remove chrysotile asbestos from Quebec's schools, hospitals and buildings. Quebec’s own health experts have told Mr. Charest that the evidence is undeniable that it is impossible to manage chrysotile asbestos safely. Mr. Charest was exhorted to listen to the world's leading, authoritative scientific institutions and experts who are asking him to stop exporting asbestos. The speakers appealed to Mr Charest to respect Canada’s tremendous human rights record and put people over profit and tell the truth about chrysotile asbestos. He is on a trade mission promoting education & science and accompanied by Quebec university presidents. Therefore they should speak up to defend scientific freedom of speech!

Trade unions and human rights activists urged Dr. Manmohan Singh to face the truth that Quebec is exporting its public health tragedy to India even as it has stopped use of chrysotile asbestos in its own country. The Indian government should recognise that in face of declining use for asbestos in developed countries, corporate greed has forced a shift in asbestos trade toward developing countries. Today a powerful message was sent out that our countries can not be turned into global dumping grounds through transfer of hazardous industries and hazardous waste without regard for the labour-, human- and environmental rights.

Trade unions and activists called upon Dr. Manmohan Singh and Mr. Charest to:
• Ban mining, manufacture, use and trade of asbestos in India and Canada.
• Let the expert health authorities of both countries set the policy on asbestos, not the asbestos lobby
• Revise their stand and support the listing of chrysotile asbestos in the PIC list of the Rotterdam Convention.
• Ratify the ILO Convention on Asbestos.
• Close all asbestos mines and take concrete steps to address the occupational and safety concerns of workers employed in asbestos related industries; ensure compensation for workers harmed by asbestos and support a just transition for workers losing employment due to a ban on the mining, use in manufacture, and trade in asbestos.

At the conference victims of asbestos diseases narrated their sufferings from the incurable and fatal illnesses who are dying a slow death with no legal and medical remedy in sight. The Press Conference was co-organised by Building and Wood Workers’ International, Delhi Asangathit Nirman Mazdoor Union, New Trade Union Initiative, Occupational & Environmental Health Network of India and Ban Asbestos Network of India (BANI). 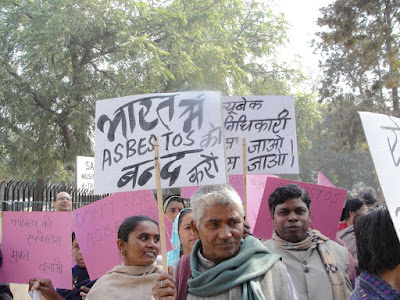 
Great post i must say and thanks for the information. Education is definitely a sticky subject. However, is still among the leading topics of our time. I appreciate your post and look forward to more.