Lobbyists push use of asbestos in developing nations 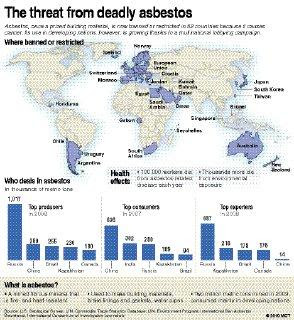 Lobbyists push use of asbestos in developing nations
By Jim Morris

WASHINGTON — A global network of lobby groups has spent nearly $100 million since the mid-1980s to preserve the international market for asbestos, a known carcinogen that’s taken millions of lives and is banned or restricted in 52 countries, the International Consortium of Investigative Journalists found in a nine-month investigation.

Backed by public and private money and aided by scientists and friendly governments, the groups helped facilitate the sale of 2.2 million tons of asbestos last year, mostly in developing nations. Anchored by the Montreal-based Chrysotile Institute, the network stretches from New Delhi to Mexico City to the city of Asbest in Russia’s Ural Mountains. Its message is that asbestos can be used safely under “controlled” conditions.

As a result, asbestos use is growing rapidly in countries such as China and India, prompting health experts to warn of future epidemics of lung cancer, asbestosis and mesothelioma, an aggressive malignancy that usually attacks the lining of the lungs.

The World Health Organization says that 125 million people still encounter asbestos in the workplace, and the United Nations’ International Labor Organization estimates that 100,000 workers die each year from asbestos-related diseases. Thousands more perish from exposures outside the workplace.

Dr. James Leigh, the retired director of the Centre for Occupational and Environmental Health at the Sydney School of Public Health in Australia, has forecast a total of 5 million to 10 million deaths from asbestos-related cancers by 2030, an estimate he considers conservative.

“It’s totally unethical,” Jukka Takala, the director of the European Agency for Safety and Health at Work and a former International Labor Organization official, said of the pro-asbestos campaign. “It’s almost criminal. Asbestos cannot be used safely. It is clearly a carcinogen. It kills people.”

Indeed, a panel of 27 experts convened by the WHO’s International Agency for Research on Cancer reported last year: “Epidemiological evidence has increasingly shown an association of all forms of asbestos ... with an increased risk of lung cancer and mesothelioma.”

The asbestos industry, however, has signaled that it will fight to protect sales of raw fiber and finished products such as asbestos cement roofing and water pipes. Among its allies are industry-funded researchers who have contributed hundreds of articles to the scientific literature claiming that chrysotile — white asbestos, the only kind sold today — is orders of magnitude less hazardous than brown or blue asbestos. Russia is the world’s biggest chrysotile producer, China the biggest consumer.

“It’s an extremely valuable material,” argued Dr. J. Corbett McDonald, an emeritus professor of epidemiology at McGill University in Montreal who began studying chrysotile-exposed workers in the mid-1960s with the support of the Quebec Asbestos Mining Association. “It’s very cheap. If they try to rebuild Haiti and use no asbestos it will cost them much more. Any health effects (from chrysotile) will be trivial, if any.”

McDonald’s sanguine view of chrysotile assumes that employers provide proper dust controls, ventilation and protective equipment for workers, but public health experts say that such measures are uncommon in the developing world.

“Anybody who talks about controlled asbestos use is either a liar or a fool,” said Barry Castleman, an environmental consultant based near Washington who advises the WHO on asbestos matters.

Fire- and heat-resistant, strong and inexpensive, asbestos — a naturally occurring fibrous mineral — once was seen as a construction material with near-magical properties. For decades, industrialized countries from the United States to Australia relied on it for countless products, including pipe and ceiling insulation, shipbuilding materials, brake shoes and pads, bricks, roofing and flooring.

In the early 20th century, reports of the mineral’s lung-ravaging properties began to surface. By the century’s end, millions of people were sick or had died from asbestos exposure, and billions of dollars in compensation had been paid to claimants.

Ninety-five percent of all the asbestos ever used has been chrysotile.

This sordid history, however, hasn’t deterred the asbestos lobby, whose longtime leader is Canada. The federal government and the government of Quebec, where chrysotile has been mined for decades, collectively have given 35 million Canadian dollars to the Chrysotile Institute, formerly known as the Asbestos Institute.

Canada uses little asbestos domestically but it sent 168,000 tons abroad last year; more than half of that went to India. Canada has fought to keep chrysotile from being listed under Annex III of the Rotterdam Convention, a treaty that requires exporters of hazardous substances to use clear labeling and warn importers of any restrictions or bans.

“Since 1979, the government of Canada has promoted the safe and controlled use of chrysotile and our position remains the same,” Christian Paradis, the natural resources minister in Canada’s conservative government and a former president of the Asbestos Chamber of Commerce and Industry, told the International Consortium of Investigative Journalists in a written statement.

Amir Attaran, an associate professor of law and medicine at the University of Ottawa, calls the government’s position unconscionable. “It’s absolutely clear that (Prime Minister) Stephen Harper and his government have accepted the reality that the present course of action kills people, and they find that tolerable,” Attaran said.

The Chrysotile Institute’s president, Clement Godbout, said his organization’s message had been misinterpreted.

The institute is a purveyor of information, Godbout emphasized, not an international police agency.

“We don’t have the power to interfere in any countries that have their own powers, their own sovereignty,” he said.

Godbout said he was convinced that large asbestos cement factories in Indian cities had good dust controls and medical surveillance, though he acknowledged there might be smaller operations “where the rules are not really followed. But it’s not an accurate picture of the industry. If you have someone on a highway in the U.S. driving at 200 miles per hour, it doesn’t mean everybody’s doing it.”