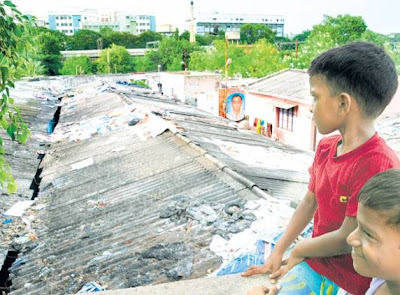 Asbestos, a commonly used construction material, is now drawing as much heat for its carcinogenic properties as endosulfan has for its debilitating side-effects.

Fifty-five countries across the world have banned asbestos and people in the US are suing builders for billions of dollars for health problems caused by exposure to asbestos, but it appears as though Tamil Nadu just cannot get enough of the hardy sheets.

They are used in everything from cramped, makeshift quarters provided for construction workers who build roads and flyovers or as roofing for garages. Asbestos is close to indispensable in the state.

Asbestos is considered a sturdy, waterproof, fire retardant material that can be bought for as low as Rs 250 per sheet, making it the poor man’s delight. However, the fibrous mineral is constantly shedding particles that cause irreversible damage to the lungs, and even trigger dangerous cancers when inhaled continuously.

“Asbestos use was restricted in the ’60s, but the cheap construction material is used widely these days. Around 80 per cent is used for roofing purposes in slums and temporary shelters. Asbestos waste is not biodegradable, and these fibres tend to get lodged in the lungs. Initially, exposure causes allergic symptoms of coughing, sneezing and weight loss, but chronic exposure can cause pneumoconiosis and cancers of the lungs and bronchi,” said Dr S. Elango, former state director of public health.

“At a time when most nations, including Australia, and the European Union, have banned asbestos, Tamil Nadu is using copious amounts of the material. After the Kumbakonam fire tragedy, asbestos lobbyists convinced the TN government to replace all eco-friendly thatched roofing in government schools with asbestos roofs — a deadly move for the state’s children,” says Mr Gopal Krishna, founder of the Ban-Asbestos Network in India.

“India’s asbestos industry is now worth Rs 4,500 crore and some of the key private players are based in Tamil Nadu. What’s worse is that the state government runs asbestos factories under the Tamil Nadu Cements Corporation label. There are PSU plants in Virudhunagar, Perambalur, Karur and Cuddalore districts, where workers, their families and the surrounding communities are exposed to the toxic fibres,” he laments.

In addition to using asbestos in all its constructions, the government is promoting the killer material by waiving sales tax on asbestos sheets.

The Central government had banned mining of white asbestos (chrysotile) in 1989 as the asbestos dust was recognised as a severe health hazard. However, Indian companies continue to import asbestos from Canada and Russia, and employ hapless workers to mould the toxic material into the ubiquitous corrugated sheets.

On June 23 however, the Indian delegation to the ongoing Rotterdam convention in Switzerland agreed to include asbestos in their list of harmful chemicals. The Rotterdam convention is a United Nations Treaty that promotes responsible handling of hazardous chemicals, and India’s move may encourage other nations like Canada, Ukraine, Kazakhstan, Kyrgyzstan and Vietnam to discourage asbestos use.

“Maybe this is the beginning of the end,” says a hopeful Gopal Krishna.