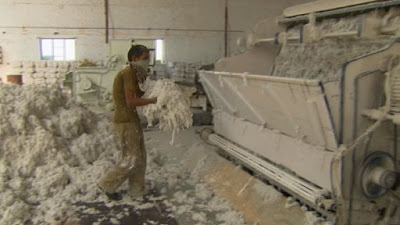 The former power station worker is sick after years of exposure to asbestos that's used as an insulator in his workplace.

'When it would blow, my hair would turn white'. Naran Mehra

Unwittingly, he brought the danger home. His wife Sevita Devi used to shake asbestos dust from his clothes before washing them and now she's also stricken with disease. With no money for proper medical care the couple have given up hope for the future.

Asbestos illness in India is under-diagnosed and mostly unrecognised as a health problem. But with the proliferation of factories making and using asbestos products and an import trade in asbestos building products booming, India has become a new frontier for what's sure to be a dramatic, devastating health crisis.

Indian asbestos workers have little in the way of safety equipment and if they contract a respiratory illness like asbestosis or a cancer like mesothelioma few are paid compensation.

And unlike many developed countries where asbestos products have been banned, India can't get enough of what's called poor man's roofing. Alarmingly it's a first world nation that's supplying the stuff. Canada won't use asbestos itself but it is selling it by the shipload to India. Business is so brisk Canada is breathing new life into its asbestos mining industry to bolster its exports.

'It amounts to Canada being a purveyor of death around the world. Our country is an exporter of a deadly substance, and we enjoy it ... at least our federal government does'. Professor Amir Attaran, University of Ottawa

The asbestos industry is pouring millions of dollars into a campaign to assure India and convince any other developing nation that may be in the market that white asbestos, or chrysotile, is safe.

'This particular asbestos has not been known to give cancer, so far' Abhaya Shanker, Managing Director, Hyderabad Industries

Reporter Matt Peacock has spent decades investigating and uncovering many of the health scandals caused by asbestos. In fact much of his reporting has helped to elevate awareness about the dangers of asbestos in Australia. He's encountered some shocking scenes in his career but India's asbestos drama shocked even this seasoned correspondent.

'I first began covering the story of its trail of death in Australia thirty years ago. Back home and in other developed countries the problem now is how to get rid of it. But India it seems is racing headlong into repeating the same mistakes only on a massive scale.