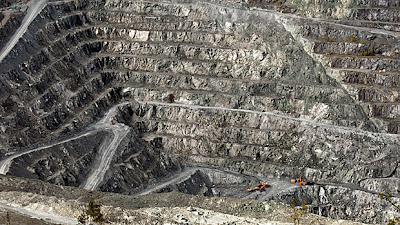 The Jeffrey mine in Quebec's Eastern Townships had mostly shut down by 2010 but was to be revived with a $58-million loan from the Quebec government. It is looking more and more likely that Canada's last remaining asbestos operation will never resume. (Jacques Boissinot/Canadian Press)
Canada's dying asbestos industry was dealt another blow Friday from one of its former friends, with Industry Minister Christian Paradis announcing that the federal government will no longer oppose global rules that restrict use and shipment of the substance.
In an announcement in Thetford Mines, Que., where he took several shots at the province's new Parti Québécois government, Paradis said his Conservatives are reversing course and won't use their veto to stop chrysotile asbestos from being listed as a hazardous substance under the international Rotterdam Convention.
Paradis also said Ottawa will invest up to $50 million to help the country's last remaining asbestos mining region, in Quebec's Eastern Townships, to diversify into other areas of activity.
The government had previously blocked the chrysotile form of asbestos from being listed under the convention on three occasions, most recently at a summit last year in Switzerland. The convention requires consensus of its members to list a substance; five other forms of asbestos are already covered by it.
Asbestos production in Quebec has been de facto shut down for the last couple years, but the outgoing Liberal provincial government was loaning $58 million to a company to restart its chrysotile mining and export operations.

The incoming Parti Québécois provincial government has promised to cancel the loan, and suggested it would ban asbestos production and exports outright.
The federal government's stance, however, has been that "we promote the safe and controlled use of chrysotile."
Paradis basically blamed incoming Quebec Premier Pauline Marois for forcing Ottawa's hand, saying Friday that Marois "has clearly indicated her intention to ban the production of chrysotile in Quebec. Evidently this action will have a negative impact on the future prosperity of our region."
The PQ, though, has repeatedly pledged to take the $58 million from cancelling the loan to the Jeffrey asbestos mine and put it toward economic diversification in the area. Reopening the mine would have put 400 to 500 employees back to work.
Convention imposes disclosure rules
As recently as 2010, Canada was producing 150,000 tonnes of asbestos annually, all of it in Quebec, and exporting 90 per cent — worth about $90 million — to developing countries. More than 50 countries ban the mining and use of asbestos because it causes cancer. But Canada, traditionally a major exporter, has successfully lobbied to keep it off the Rotterdam list, putting it in the company of Vietnam, Kazakhstan and Kyrgyzstan, which also opposed the move.
A listing in the convention forces exporting countries to warn recipients of restrictions and bans on a substance, to label their exports and to handle substances in controlled ways. A party to the convention also has the right to ban imports of any listed substance.
"It does create bureaucratic hurdles that do not exist at this time, and in international trade, an unnecessary bureaucratic hurdle just becomes a trade barrier," said Guy Versailles, a spokesperson for the consortium behind the Jeffrey mine.
Versailles said the company was disappointed by Paradis's announcement, but insisted that it's not the death knell of the asbestos industry and that talk of the consortium's $58-million lifeline getting revoked is mere speculation.
"This in no way signals the end of chrysotile in Quebec," he said. "The Jeffrey mine has kept going ahead as planned to reopen the mine."
A second operation, the Lac d'Amiante mine in Thetford Mines, declared bankruptcy late last year. Employees there have been pushing for a return to work, but the company would have to gain access to new deposits of the mineral to have anything to extract.
Major killer
Three of the four major parties in Quebec's recent election campaign vowed to shut down the industry in the province. The Canadian Cancer Society and the Quebec Medical Association have also denounced the plan to reopen the Jeffrey mine.
The cancer society said Friday that the federal government made the "right decision" in withdrawing its opposition to listing chrysotile asbestos as hazardous; the Canadian Medical Association and the Canadian Public Health Association concurred.
"This is an important first step," the cancer society's vice-president, Paul Lapierre, said in a news release."It's imperative that the health of people around the world be put ahead of the interests of the asbestos industry."
The World Health Organization says 107,000 people around the world die annually from ongoing workplace exposure to asbestos. It is still used in many developing countries in everything from roofing tiles to cement pipes and boiler insulation, and even Canada imported $2.6 million worth of asbestos brake pads last year.
Federal Opposition Leader Tom Mulcair noted that the NDP has long wanted asbestos on the Rotterdam Convention list.
"It's taken time," he said. "I was the first Quebec politician to come out clearly against the mining and export of asbestos. There was no safe use."
Needle-like asbestos fibres were once considered magic minerals. They were woven into clothes, building insulation and coffee pots. They were even mixed with children's play dough. In its heyday, the Jeffrey mine in Asbestos, Que., was the biggest open-pit asbestos mine in the world.
Then, starting in the late 1960s and '70s, study upon study began linking asbestos to voracious diseases such as lung cancer, scarred lungs (asbestosis) and mesothelioma, a cancer of the stomach and chest that is only caused by exposure to asbestos.
Posted: Sep 14, 2012 3:26 PM ET
Last Updated: Sep 14, 2012 10:19 PM ET
For complete story: http://www.cbc.ca/news/canada/montreal/story/2012/09/14/montreal-canada-thetford-mines-asbestos.html