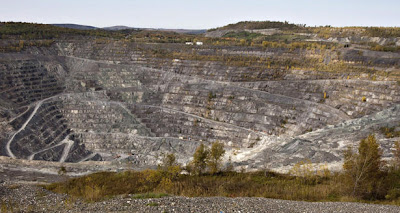 Jacques Boissinot/THE CANADIAN PRESS The Jeffrey open-pit asbestos mine in Asbestos Que. (Oct. 7, 2011)
Kathleen Ruff
In the space of three weeks, the political support the Quebec asbestos industry has enjoyed for decades from the Quebec and Canadian governments came crashing down.
It could hardly have been more politically dramatic or more financially devastating for the tottering, bankrupt Quebec asbestos industry. After 130 years in operation, the last two asbestos mines in Quebec — the Jeffrey mine in the town of Asbestos and the mine run by LAB Chrysotile at Thetford Mines — shut down more than a year ago in the face of catastrophic financial and environmental problems.
Both mines, however, clutched to hopes of resurrection, nurtured by a $58-million loan given to the Jeffrey mine by former premier Jean Charest just before he called the recent Quebec election, as well as by the undying political support that Prime Minister Stephen Harper swore to give to the asbestos industry during the 2011 federal election campaign.
Things fell apart for the asbestos industry when, near the end of the Quebec campaign, Parti Québécois Leader Pauline Marois promised to cancel Charest’s $58-million loan and instead give financial support to help the asbestos mining region diversify its economy. Asbestos is an industry of the past, Marois said, pointing to evidence put forward by Quebec’s own medical authorities that asbestos is deadly and should no longer be mined.
Three weeks later, on Sept. 14, before the new PQ government had even been sworn into office, the federal government put the final nail in the industry’s coffin. Christian Paradis, Harper’s Quebec lieutenant and the asbestos industry’s biggest cheerleader, announced — in his own riding of Thetford Mines — that Ottawa had concluded the industry was finished in Quebec and would provide $50 million for economic diversification instead of asbestos mining.
Paradis also announced that the government would cease blocking the listing of chrysotile asbestos as a hazardous substance under the UN Rotterdam Convention, as it has done since 2006.
It’s not often the Harper government backs down on any issue. No one should rejoice, however, that this sudden reversal might have been triggered by a new enlightened acceptance of scientific evidence or a desire to prevent further asbestos deaths. It was instead a cynical game of realpolitik.
Paradis accused Marois of destroying the economic well-being of the region by killing the asbestos industry. This delinquent act had forced the federal government to abandon its support of an industry that would no longer exist, he said.
Paradis did not mention that the industry had already closed down; that it had slashed wages and benefits of the last remaining workers to what the union president called “starvation wages”; that Quebec taxpayers are paying millions to clean up the environmental destruction caused by the industry; or that the industry has no hope of restarting without a massive injection of government funds.
The Harper government claims to be hard-headed on economic issues and to oppose government handouts. But Paradis omitted economic facts and instead sought to foment hostility against the new PQ government for destroying a supposedly viable industry.
Furthermore, Paradis denied the medical facts, repeating the sordid propaganda that asbestos can be safely used.
The Harper government is the only one in the western world that continues to deny scientific evidence on the threat asbestos poses to health. Not only people overseas, but also Canadians, are harmed by this denial. Health Canada puts out dangerous misinformation minimizing asbestos risk, and federal regulations permit exposure to asbestos fibres at a level 10 times higher than that permitted in other western countries.
The Canadian government allows asbestos-containing products, such as car brakes, construction materials, and even children’s toys, to be imported into Canada, thus putting Canadians at risk. Unlike other industrialized countries, Canada has no national program to protect citizens from asbestos harm.
Canada needs to join the more than 50 other countries that have banned the mining, use and export of asbestos. Until it does, Canadians will, often unknowingly, continue to be exposed to asbestos and many will die painful deaths as a consequence.
The decision by Paradis to stop supporting the asbestos industry was a humiliating reversal for the Harper government. It was, nevertheless, an excellent decision, even if made for the worst reasons.
The government will no longer prop up the asbestos industry. This is a historic victory ending decades of federal financial and political support for a deadly industry.
The battle to end the Harper government’s denial of scientific evidence and failure to protect Canadians from asbestos harm continues.