Doctor for Asbestos free world, Morris Greenberg is no more

One of the very earliest members of the Collegium Ramazzini, an independent academy in memory of the father of occupational medicine, Bernardino Ramazzini, Dr Morris Greenberg is no more. He died peacefully on August 19, 2021. He was a recipient of Ramazzini Award. Avi Greenberg informed that his grandfather is survived by his wife Gillian, his three children Susannah, Naomi and Daniel, his 11 grandchildren, and his 3 great grandchildren. Avi is a PhD Student in Prof. Itamar Simon's lab, Department of Microbiology and Molecular Genetics at Hebrew University Medical School, Jerusalem.

In 1974, as Medical Inspector of Factories, UK, Dr. Morris Greenberg wrote a paper on the register of mesothelioma due to occupational asbestos exposure. He observed, "Overall in the study there were 38 cases (15.0% of all mesothelial tumours) lacking evidence of asbestos exposure. In this study the briefest occupational exposure to asbestos associated with a mesothelial tumour was three weeks, but if asbestos was a cause of mesothelioma it cannot be assumed that lesser exposures are safe." Most likely it is one of the earliest studies to underline that long duration of asbestos exposure is not a pre-condition for emergence of incurable asbestos related diseases.  Dr. Morris also served as senior Senior Medical Officer, Division of Toxicology and Environmental Health in the UK Department of Health. His work contributed to the enactment of UK's Employment Medical Advisory Service Act,1972. He was a founding member of the Council of the Royal Society of Medicine Occupational Health Section.

A Fellow of Collegium Ramazzini, Barry Castleman, author of Asbestos: Medical and Legal Aspects recalled, "In 2008, the Collegium Ramazzini had just met, and the periodic review of the Rotterdam Convention was scheduled to take place immediately afterward at the FAO in Rome. Activists were coming to Rome to contest the opposition to including chrysotile asbestos in the PIC list of substances covered by the convention's prior informed consent duty.  We needed some scientists to join the activists in trying to make a difference there.  Morris and Colin agreed to come down with me on the train and spend several days there, in case anybody wanted to argue about the lethality of chrysotile asbestos." Dr Morris would have been quite happy to see inclusion of chrysotile asbestos in the UN list of hazardous substances under Rotterdam Convention on Prior Informed Consent Procedure for certain Hazardous Chemicals and Pesticides in International Trade in his lifetime. 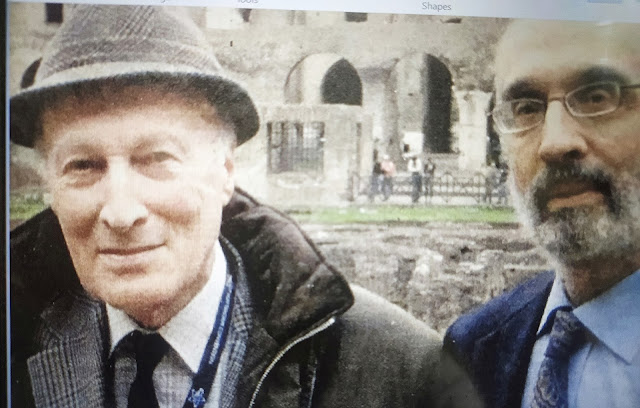 (Photo: Dr. Morris Greenberg in hat with Dr. Barry Castleman)
In an article in American Journal of Industrial Medicine, he recalled how an inquiry from the UK in 1912 as to the health of Quebec asbestos miners was met by a denial of ill-health, but the loading of the premiums of asbestos workers in the 1930s indicated that, despite further reassuring health studies on Quebec miners, actuaries had data that was cause for serious concern.
In Social History of Medicine, he wrote a chapter on "Knowledge of the Health Hazard of Asbestos Prior to the Merewether and Price Report of 1930" about the initial realization of the burden of ill health associated with occupational exposure to asbestos dust, and the need for environmental control, which according to him pre-dated the publication of the results of the survey by Merewether and Price in 1930. He held the view that there was sufficient evidence available prior to 1930 that should have led to preventive action. He observed, "The responsibility for this delay must be shared between manufacturers, workers' representatives, the Factory Inspectorate and Scientists involved in the relevant research."
Notably, the Annual Report of the Chief Inspector of Factories in Great Britain for the year 1947 (published in 1949) was authored by the Chief Inspector,  UK, E. R. A. Merewether, a general practitioner who worked with an industrial engineer, C.V. Price, to publish the first epidemiological study of the asbestos industry in 1930. They examined 363 workers involved in opening, carding, stripping, grinding, spinning and weaving in asbestos textiles mills in the UK. They found that one in four of the workers had signs of a serious respiratory disease, paving the way for legislation. The findings were published in the US industrial medical journal- Journal of Industrial Hygiene in 1930.
In such a backdrop, writings of Dr. Morris underline the need for convergence between history of public health and medical science for preventive action against environmental and occupational diseases.
Towards the end of his life, he was dismayed by the uncertain state of occupational medicine. He wrote on The Rise and Fall of Occupational Medicine in the United Kingdom in the American Journal of Preventive Medicine. In the naked lust for profit by conscienceless body corporates, the plight of occupational health of workers is not accorded any priority by ruling parties who survive on the donations from these very undemocratic entities.
Ban Asbestos Network of India (BANI) salutes him and his work for the protection of public health. In November 2015, BANI co-signed a letter authored by Katherine Ruff, a noted Canadian human rights activist, with him to the Canadian Prime Minister seeking ban on asbestos. Subsequently, Canada banned asbestos. Canada has been one of the main suppliers of asbestos to India, which has banned its own asbestos mining due to harmful effects of asbestos mineral fibers. Dr Morris was familiar with the public health crisis in India in this regard. When he wrote in the matter of industry efforts to prevent asbestos ban in Pakistan, he recalled that Asbestos Cement Products Manufacturers of India like their Pakistani counterpart is part of the International Chrysotile Association, which represents the interest of the Chrysotile industry world over. His work was dedicated to occupational justice across the globe which is an inspiration for countries like India where environmental-occupational health doctors are rare to find and required infrastructure is almost non-existent.
Posted by mediavigil at 2:29 AM