Indian workers struggle to breathe thanks to Canadian asbestos 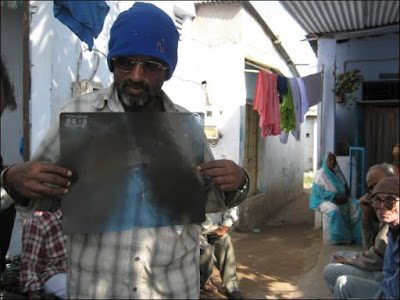 Muthuswamy Minayan works every day even though (as X-ray shows) he's
got a plaque buildup in his lungs that caus-es him to struggle for
breath.

AHMEDABAD, INDIA -- Mangabhai Patel rubs his hands on either side of
his chest and points to the pain that has left him breathless for the
last 11 years.

The man's lung capacity has deteriorated so much that he is now forced
to breathe through a respirator for three hours a day. Patel said he
is counting his days, since his doctor isn't sure how much longer
Patel will live.

"Because of the dust in the air I breathe, I get cough," he said
through a translator.

"I am suffering from this disease. These companies, these countries
have caused me this disease. I'm asking them to treat me."
Patel is one of hundreds of factory and construction workers in the
state of Gujarat who are seriously ill from inhaling chrysotile
asbestos fibres on the job.

More than 120 workers have filed for compensation for asbestos-related
health problems through India's Supreme Court in Gujarat, a seaside
state where ships deliver chrysotile asbestos from Quebec before it is
sent to factories and manufacturing plants across India.

Much of the chrysotile asbestos used in Gujarat comes from Canada, and
dozens of Gujarati workers like Patel know colleagues who have died.
They have stacks of medical documents proving the tight feeling in
their chests is a result of a build-up of asbestos fibres in their
lungs.

Canadian chrysotile asbestos accounts for about one-third of all
asbestos in India and is used to make everything from corrugated metal
roofing to water pipes.

Indian doctors estimate that at least 100,000 workers inhale
chrysotile asbestos fibres every day. Most workers don't wear masks
and are unaware of the hazards of working with the material.

Asbestosis and mesothelioma, a deadly form of cancer caused by the
fibres, are difficult to track, since it can take between 10 and 30
years for the inflammation or cancer to manifest in the lungs.

No one knows how many Indian workers are sick or how may have died as
a result of inhaling asbestos fibres.

"The rate at which workers are dying is noticeable," said Gopal
Krishna, an activist with the Ban Asbestos Network of India, a Delhi-
based non-governmental organization.

He is critical of Canada's role as an exporter of asbestos. 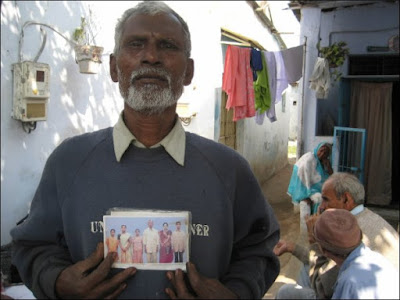 Chinna Chinnakannu holds a picture of his family. He says he is
willing to risk his health in order to provide for them.
"Here is a country that has a civilized persona, which is indulging in
the most uncivilized barbaric act of exposing workers (to asbestos)."

Winnipeg MP Pat Martin said by e-mail that Canada's affinity for
asbestos is based on the federal government's refusal to offend
Quebec.

"Not only is Canada's policy on asbestos morally and ethically
reprehensible, we go out of our way trying to block other countries
from banning asbestos. Honestly, Canada should hang its head in
shame."

Sitting outside a factory worker's home in Ahmedabad, Krishna snaps
photos of a dozen workers' medical assessments and scribbles notes to
add to his growing file. The workers have taken half a day off to meet
Krishna, with the hope someone can help them receive compensation for
their illness and help pay their medical bills.

Krishna said most of the men have inhaled asbestos dust from sawing
through cement or metal products that contain the fibres. Fewer than
30 workers in India have been formally compensated over the last
decade, and Krishna said the men sitting across from him will be lucky
to receive any money.

Krishna said workers often can't afford to quit their jobs, even
though doctors tell them continuing to work with asbestos will only
make their symptoms worse.

Although India imports chrysotile asbestos from Russia and Kazakhstan,
Krishna said it's Canada's slick pro-asbestos marketing campaigns that
keep the asbestos industry in business. Krishna said Canadians have
had scientific experts speak about the safety of the material for
years, without acknowledging that developing countries like India
don't have or enforce the same health and safety standards as the
western world.

Muthuswamy Minayan holds up an X-ray of his lungs that shows the white
plaque that leaves him tired and out of breath. Minayan has pain on
either side of his chest every day, but still goes to work to support
his six sons.
"I didn't know. Just five years ago, I came to know the danger in it,"
he said, noting he has used a machine to saw ridges into metal sheets
that contain chrysotile asbestos for more than 25 years.

Despite evidence from Indian doctors and workers, Natural Resources
Canada maintains that chrysotile asbestos is safe and that it's up to
countries like India to ensure workers are protected.

A spokesperson from Natural Resources Canada said more than 93 per
cent of Canadian chrysotile asbestos is mixed with cement, which
prevents the release of asbestos fibres -- except when workers saw
through the cement.

The spokesperson said Canada provides information to importing
countries on how to manage the risks associated with chrysotile and
supports the work of the Chrysotile Institute, a non-profit
organization that promotes chrysotile and advocates for its safety.

"While implementation of domestic measures to ensure workplace health
and safety is a sovereign responsibility of importing countries,
Canada makes efforts to promote the 'controlled use' of chrysotile,"
the spokesperson said in an e-mail.

That's little comfort for Chinna Chinnakannu, 53, who is more
concerned with providing for his family than his own health.

Chinnakannu holds up a photo of his three daughters and one son.
They're the reason he still goes to work in a Gujarati cement factory
every day.

Although Chinnakannu knows the plaque in his lungs is getting worse
from continued exposure, he said he muscles through the pain to make a
living.

"It's not about being happy, it's about compensation," Chinnakannu
said. "My focus is breadwinning. I have to get my daughter married and
take care of my son."

Although most of the victims of asbestosis are men who work in
asbestos manufacturing plants or construction, there are three
documented cases in the Gujarat area of women who have gotten sick
from inhaling asbestos fibres from their husband's clothes.

Savita Behn was diagnosed with asbestosis in 2003, even though she has
never set foot in a factory or construction site. Behn's husband works
in a cement factory and she said she used to inhale the dust from his
clothes when she did laundry every few days.

Today, Behn suffers from breathing problems and severe fatigue.
Walking or even eating, she said, leaves her exhausted.

"Because of breathlessness, I can't walk. (That's why) I'm sitting
like this."

* Canada exports chrysotile asbestos and other chrysotile products to
70 countries around the world. In 2006, these exports were worth $114
million.

* About 1,900 people are employed in the asbestos industry in Canada.

* More than 40 countries, including Japan, Australia and the European
Union, have banned all imports of chrysotile asbestos.