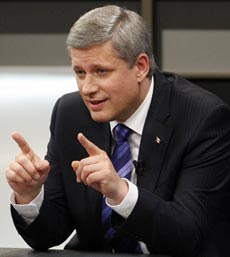 (In the picture: Stephen Harper, Prime Minister, Canada)
Motive questioned in failure to disclose asbestos study
A British expert who oversaw a report on the dangers of the chrysotile variety of asbestos says he believes Ottawa tried to suppress his work to protect the Quebec industry that mines the cancer-causing mineral.

"I can only speculate, and my speculation is that there were interests in continuing Canadian production of chrysotile and they saw the report as a threat," Trevor Ogden, editor-in-chief of the Annals of Occupational Hygiene and a former top adviser to the British government on asbestos hazards, said in an interview.

Dr. Ogden headed an expert panel that Health Canada assembled in late 2007 to study the cancer risk of chrysotile. The report has been ready since March, 2008, but has been available only since last week
after Access to Information Act requests from the media, including The Globe and Mail.

Health Canada isn't publishing the report on its website, the usual practice for scientific studies that it funds, but says anyone who asks for a copy will be given one.

Although the link between asbestos and cancer is accepted internationally, the saga of the report indicates just how sensitive the issue is within the federal government.

Canada and other developed countries use little asbestos, and many nations ban it because of the health and liability risk. Most of Quebec's production is exported to the developing world for use as an inexpensive additive to strengthen cement building products.

Ottawa has spent nearly $20-million since 1984 promoting the mineral abroad. Health Canada said it delayed releasing the report because of the need to study it. "Health Canada took the time necessary to carefully
review the findings of the report, and to consult with other federal and provincial partners," it said in a statement to The Globe.

The introduction to the report, written by Dr. Ogden, concludes that chrysotile shows "a strong relationship of exposure with lung cancer, but a much less certain relationship with mesothelioma," a cancer in the lining of the chest wall.

The report also concludes that chrysotile generally contains trace amounts of a more harmful variety of asbestos known as tremolite.

As well, the panel noted but couldn't explain why the results of two studies suggest that it is far more of a health hazard for people to work with asbestos than to mine it.

The studies showed that lung cancer risk in South Carolina textile workers who use asbestos was about 70 times greater than that of Quebec's miners, according to the report. Asbestos causes cancer when its fibres are inhaled.

In an interview, Leslie Stayner, an epidemiology professor at the University of Illinois who was on Health Canada's asbestos panel, said researchers do not know why the textile workers were at greater risk. He said one theory is that the longer asbestos fibres used to make textiles are more deadly.

Dr. Stayner says he would be reluctant to work with Health Canada again because he feels the government "violated" an understanding that the work would be published in a timely fashion on a government website.

Health Canada said in its statement that it "sought the advice of leading international scientists on the risks posed by chrysotile asbestos so that it could better understand the scientific debate. No other country has encouraged such a debate amongst scientists with widely varying opinions."

Health Canada isn't alone in having trouble handling the issue of asbestos. Late last month, Liberal Leader Michael Ignatieff responded to a questioner at a town hall in Victoria about Canada's asbestos exports by saying the sales "of this dangerous product overseas has got to stop."

The remarks were recorded by the Tyee, the British Columbia-based online magazine.

"I'm probably walking right off the cliff into some unexpected public policy bog of which I'm unaware, but if asbestos is bad for parliamentarians in the Parliament of Canada, it just has to be bad for everybody else," he said.

But when he was later asked about the remark by reporters, he dropped the call for an end to exports. 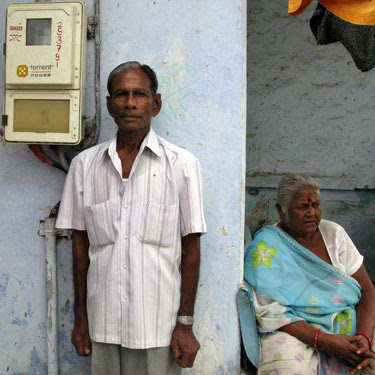 In the pictures, Narayan and Suneetha Mehra in Ahmedabad. Mehra, who worked at a power plant and insulated steel poles with asbestos, has asbestosis, and so does his wife, from washing his clothes. Under the law the former can pursue the case for meager sum of money as compensation but fearing a protracted legal battle, he chose a out of court settlement. Few thousand of rupees that he got has already been spent in buying medicines which are nothing more than placebo. His wife does not have even this legal remedy or any other remedy.
Posted by mediavigil at 10:15 AM

Speaking as a Canadian, I apologize for my country's shameful behaviour.

Possibly one of the reasons the government was so worried about releasing the report was that they currently give $250 000 a year to an industry group called the Chryostile Institute, which produces so-called "research" proving that asbestos is safe.

Those reports are then used to justify the fact that my country sells asbestos abroad, even while it can't legally sell it here at home.