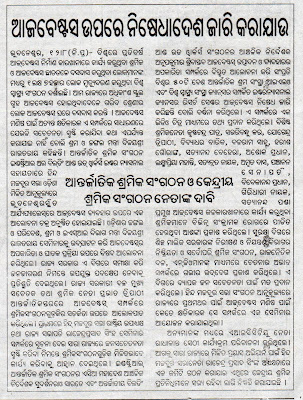 After week long blockade in front of the gates of the Vishaka Asbestos Plant at Parmanpur in Sambalpur Dist of Odisha, the plant has come to a grinding halt. There were 9 trucks inside carrying outward material and about 12 trucks waiting raw materials including Asbestos Fibres, cement and other raw material, which remained lined up in the heavy rains since past one week.

The road blockade, by the farmers of the region, supported by the farmers whose land has been forcefully occupied by the company went out of stock of raw material and has come to grinding halt from today. The production today of the factory has been shutdown after this.

The relentless fight of the people is now bearing fruit, with the administration bowing down to the legitimate pressure induced by people of the region.

Also there has been a good meeting organized in the mean time by the Labour Unions, and the labour and forest ministrer Bijayashree Routray spoke in the meeting held in Bhubaneswar.

The labour unions and international organisations have demanded there to impose Ban on Asbestos - the news was published in Samaja news paper of 12th August.