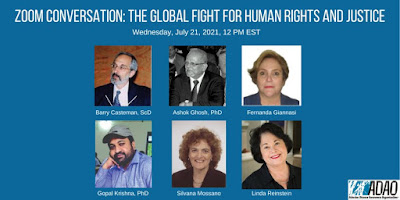 During the conversation, Dr Ashok Ghosh, Chairman, Bihar State Pollution Control Board (BSPCB) and Dr Gopal Krishna, environmental lawyer and co-founder Ban Asbestos Network of India (BANI) will discussBSPCB’s cancellation of the No Objection Certificate given to three asbestos based factories in Muzaffarpur, Vaishali and Koelwar, Bhojpur districts of Bihar, East India, which led to their permanent closure, was consistent with the recommendations of World Health Organisation (WHO), International Labour Organisation (ILO) and the verdict of Supreme Court of India. It attracted global attention.

Barry Castleman, ScD is an Environmental Consultant trained in chemical and environmental engineering. He holds a Doctor of Science degree from the Johns Hopkins School of Public Health. He has been a consultant to numerous agencies of the US government and other governments, international bodies, and environmental groups dealing with a wide range of public health issues. He has testified as an expert in civil litigation in the US on the history of asbestos as a public health problem and the reasons for failure to properly control asbestos hazards. Dr. Castleman has spent the past 40 years working on asbestos as a public health problem.

Fernanda Giannasi is a Civil and Safety Engineer and ex-Labor Inspector for the Ministry of Labor and Employment for 30 years. She is the coordinator of the Virtual Citizen Ban Asbestos Network for Latin America, founder of the Brazilian Association of People Exposed to Asbestos (ABREA) and Fellow of the Collegium Ramazzini. She serves as an expert witness in judicial cases related to asbestos, nuclear and other toxic chemicals. The 2018 Ramazzini Award was presented to Engineer Giannasi by the Collegium Ramazzini for her leadership in the promotion of an asbestos-free Brazil and in broadening the rationale for supporting a worldwide ban on asbestos and was recognized as a hero of worker safety and health as well an exemplary public civil servant.

Gopal Krishna, PhD has been a researcher and advocate on the subject of health hazards in hazardous industries like asbestos industry and ship breaking industry since 2000. He is the co-founder-convener of Ban Asbestos Network of India (BANI) and editor of BANI’s journal, www.asbestosfreeindia.org. He presented a paper “Research on Chrysotile Asbestos: Failure of Ethics by National Institute of Occupational Health and National Human Rights Commission” at 14th World Congress of Bioethics.

Silvana Mossano was born in Casale Monferrato (Piedmont, Northern Italy), where she lives. Now retired, Silvana worked as a journalist for 40 years and for 31 years at La Stampa. She primarily wrote about crime, as well as her community and education. She followed all the Eternit trials, writing tens and tens of articles in over 35 years. As a published author, she has written the novel «Il cortile (the Courtyard) » (ebook, Gruppo Gems) and «Un giorno arriverò (one day I will arrive)» (2012, Salani), di «Malapolvere (Bad Dust)» (2010, Edizioni Sonda) and «Morire d’amianto (Dying of Asbestos)» (2012, ebook, La Stampa, coauthor: Michele Brambilla) on the tragedies of Asbestos, analyzing the human side though the testimonies of the witnesses at the trials. In addition, she has written texts for theatre songs and also sings. Her site is www.silmos.it.

Linda Reinstein is the President/CEO and Co-Founder of Asbestos Disease Awareness Organization (ADAO). Reinstein became an activist when her husband, Alan, was diagnosed with mesothelioma in 2003. She co-founded the Asbestos Disease Awareness Organization in 2004, and now serves as President and CEO.  Reinstein has been a strong political voice for justice in every major asbestos-related issue.

The panel will discuss:

l Fernanda will discuss Brazil’s asbestos mining, exports to the US, and policy advancements

l Ashok and Gopal will discuss how asbestos impacts Bihar, India and the numerous requests to build and operate asbestos plants in Bihar as an example of the national health crisis

l Barry and Linda will discuss a century of human rights violations in the U.S. and what ADAO is doing to end them through legal and legislative strategies

For further details or to register visit:

ADAO was founded by Linda Reinstein and Doug Larkin in 2004 and headquartered in Redondo Beach, California. ADAO is the largest independent organisation in the U.S. dedicated to preventing asbestos exposure, eliminating asbestos-related diseases, and protecting asbestos victims’ civil rights through education, advocacy, and community initiatives.

2020-BANI asks, Did Labour Ministry delete its paper on Gov't ban on asbestos?

BANI campaigned for inclusion of chrysotile asbestos in the PIC list of Rotterdam Convention at COP 9. Chrysotile asbestos is a candidate chemical in the category of industrial chemicals that has been recommended by the Chemicals Review Committee (CRC) for listing in Annex III to the Rotterdam Convention but for which the Conference of the Parties (COP) has not yet been able to reach consensus.

BANI campaigned for inclusion of chrysotile asbestos in the PIC list of Rotterdam Convention at COP 8.

BANI campaigned for inclusion of chrysotile asbestos in the PIC list of Rotterdam Convention at COP 7.

In the absence of “sufficient evidence”, Competition Commission of India completed the probe on a reference made by Enforcement Directorate, Serious Fraud Investigation Office on the basis of a complaint received by them and concluded that the major players in the manufacturing of Asbestos Cement Sheets are  not indulging in cartelized conduct. BANI holds the view that the very existence of Asbestos Cement Products Manufacturers Association as a non-profit organisation is a proof of cartelisation.

2008-BANI wrote in Indian Journal of Occupational & Environmental Medicine, a publication of Indian Association of Occupational Health A government under an asbestos roof
BANI campaigned for inclusion of chrysotile asbestos in the PIC list of Rotterdam Convention at COP 4.

Both Union Ministry of Environment and Forests and Union Ministry of Labour & Employment informed Rajya Sabha and Lok Sabha that "Out of a total of Rs. 59.66 lacs allocated for the study by Ministry of Chemicals and Fertilizers, the Asbestos Cement Products Manufactures Association has contributed Rs. 16 lacs" on March 20, 2008 and March 17, 2008 respectively.

BANI campaigned for the inclusion of chrysotile asbestos in Annex III to the Rotterdam Convention at its third Conference of the Parties (COP3). COP3 decided that the agenda for its next ordinary meeting shall include further consideration of a draft decision to amend  to include chrysotile asbestos.

2004-BANI highlighted the reply of Indian health minister in the parliament admitting asbestos related diseases caused due to exposure.  Say no to white asbestos - Rediff.com Business

BANI welcomed entry into force of the UN's Rotterdam Convention on the Prior Informed Consent (PIC) Procedure for Certain Hazardous Chemicals and Pesticides in International Trade. It endorsed its decision to review inclusion of four amphibole forms of asbestos, amosite, actinolite, anthopyhllite and tremolite, in the interim PIC procedure besides chrysotile asbestos.

2003-BANI wrote to the Financial Express to contest the propaganda of asbestos industry regarding mythical safe & controlled use of asbestos.

2001-BANI expressed its support for the decision of the WTO Appellate Body in European Communities-Measures Affecting Asbestos and Asbestos-Containing Products against Canada.

2000-Ban Asbestos Network of India (BANI) commenced in the 5th year of Indian Supreme Court’s order of 1995 saying asbestos related diseases follows trail of exposure, & extend the chain of carcinogenic risk beyond the workplace regardless of location of exposure.

Posted by mediavigil at 5:31 AM

I love your article thanks for share the article
healthmagazineus