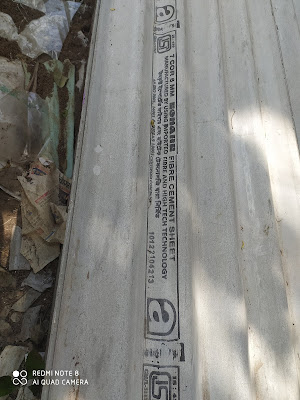 Asbestos is a proven carcinogen and banned in many countries. India has banned asbestos mining and trade in asbestos waste (dust and fibers) but it is yet to ban it's import, manufacture and use. The establishment in India has expressed its concern over the manufacture and use of this killer mineral but remain under the influence of the cartel of asbestos firms in practice at the behest of asbestos producers like Russia. Governments continue to give environmental clearance and No Objection Certificate (NOC) for asbestos based plants.

Villagers of Bihar's Bihiya, Bhojpur are up in protest. They want closure of the two asbestos plants in their neighbourhood.

"Human biology is the same everywhere. How can a chemical be deemed poisonous in one district and non-poisonous in another district of the same state," the Bihiya, Bhojpur villagers are asking. They are emboldened by the fact that Bihar Chief Minister larynx Kumar has promised in the State Assembly that he will not allow asbestos plants in Bihar.

In July 2019, he said, "We are not using asbestos sheets in government projects&schemes, nor are we providing any incentive to promoters of asbestos factories. CM has promised to provide pucca houses to the poor without the harmful asbestos roof. 79 ℅ of 200 million Dalits in India live under asbestos roofs (Census 2011).

Villagers of Bihiya, Bhojpur have been complaining against the hazardous factories in their proximity that manufacture  white asbestos-cement products. These two plants have been set up in Bihiya in Bhojpur by Tamil Nadu based Ramco Industries Ltd.

Asbestos, banned in many countries, is still used widely across India and is part of a cartel of companies who justify the use of asbestos as affordable roofing and claim that chrysotile asbestos can be safely manufactured and used without risks. These companies claim that the kind of asbestos used in India is not carcinogenic.

Globally, asbestos industry is on trial since the 1920s. So far some 70 countries, including the Nepal, Japan, Israel, South Africa and European Union, have banned asbestos. In 2005, WHO and ILO passed a resolution seeking elimination of future use of chrysotile white asbestos. A 2010 report of the International Agency for Research on Cancer said, "Epidemiological evidence has increasingly shown an association of all forms of asbestos with an increased risk of lung cancer and mesothelioma" and that an estimated 125 million people are still exposed to it.

During an International Conference on "Emerging Trends in Preventing Occupational Respiratory Diseases and Cancers in Workplace," experts warned India of the dangers of continuing with asbestos. "No matter what misinformation comes from Canada or the Indian asbestos industry, there is no doubt that chrysotile causes asbestosis and lung cancer," said Prof Arthur L Frank, Department of Environmental and Occupational Health, Drexel University School of Public Health, the USA.

Dr Alec Farquhar, former Managing Director, Occupational Health Clinics for Ontario Workers, Canada, said, "We now have around 500 asbestos cancer cases every year in Ontario. If you (India) continue on your current path, you will multiply our death count by 100 times. That is 50,000 Indian workers dying every year from asbestos."

Experts and activists are exhorting Indian Commerce Ministry to desist from importing asbestos from Russia, Brazil, Kazakhstan and China.

Union Environment Ministry s Vision Statement on Environment and Human Health said, "Alternatives to asbestos may be used to the extent possible and use of asbestos may be phased out." But the Ministry continues to give clearance to asbestos based plants.  Government is yet to disassociate itself from countries like Russia  who derailed the international consensus that could have categorised chrysotile asbestos as a hazardous substance although it is a hazardous substance under the domestic law. It is yet to set up a compensation fund for asbestos victims. New laws in India recognize asbestos related diseases but the governments are yet to make asbestos companies liable for knowingly exposing workers, consumers and citizens to asbestos fibres. Government had promised to include asbestos victims under Health Ministry s Rashtriya Swasthya Birna Yojana but it is yet to happen.

Asbestos is a group of naturally occurring fibrous minerals with current or historical commercial usefulness due to their extraordinary tensile strength, poor heat conduction, and relative resistance to chemical attack. For these reasons, asbestos is used for insulation in buildings and as an ingredient in a number of products, such as roofing shingles, water supply lines, and fire blankets, as well as clutches and brake linings, gaskets, and pads for automobiles.

The main forms of asbestos are chrysotile (white asbestos) and crocidolite (blue asbestos). Other forms include amosite, anthophylite, tremolite and actinolite.

All forms of asbestos are carcinogenic to humans. Exposure to asbestos, including chrysotile, causes cancer of the lung, larynx, and ovaries, and also mesothelioma (a cancer of the pleural and peritoneal linings). Asbestos exposure is also responsible for other diseases such as asbestosis (fibrosis of the lungs), and plaques, thickening and effusion in the pleura.

Approximately half of the deaths from occupational cancer are estimated to be caused by asbestos. In addition, it is estimated that several thousand deaths annually can be attributed to exposure to asbestos in the home.

The World Health Assembly resolution 58.22 on cancer prevention urges Member States to pay special attention to cancers for which avoidable exposure is a factor, including exposure to chemicals at the workplace and in the environment.

With resolution 60.26, the World Health Assembly requested WHO to carry out a global campaign for the elimination of asbestos-related diseases "…bearing in mind a differentiated approach to regulating its various forms - in line with the relevant international legal instruments and the latest evidence for effective interventions…". Cost-effective interventions for prevention of occupational lung diseases from exposure to asbestos are among the policy options for implementing the "Global Action Plan for the Prevention and Control of Non-communicable Diseases" (2013-2020), as endorsed by the Sixty-sixth World Health Assembly in resolution WHA66.10 in 2013.

Eliminating asbestos-related diseases is particularly targeted at countries still using chrysotile asbestos, in addition to assistance in relation to exposures arising from historical use of all forms of asbestos.

WHO, in collaboration with the International Labour Organization and other intergovernmental organizations and civil society, works with countries towards elimination of asbestos-related diseases by:

recognizing that the most efficient way to eliminate asbestos-related diseases is to stop the use of all types of asbestos;

providing information about solutions for replacing asbestos with safer substitutes and developing economic and technological mechanisms to stimulate its replacement;

taking measures to prevent exposure to asbestos in place and during asbestos removal (abatement);

establishing registries of people with past and/or current exposures to asbestos and organizing medical surveillance of exposed workers; and providing information on the hazards associated with asbestos-containing materials and products.

There is a compelling logic for a moratorium on asbestos based hazardous industries and products.

Is it not ironical that the "imported fiber" of carcinogenic white chrysotile asbestos is being advertised by asbestos companies in India given the fact that India has banned mining of all kinds of asbestos fibers because of its deleterious impact on human health?