No asbestos mine functional in India but trade, manufacture and use of asbestos yet to be stopped 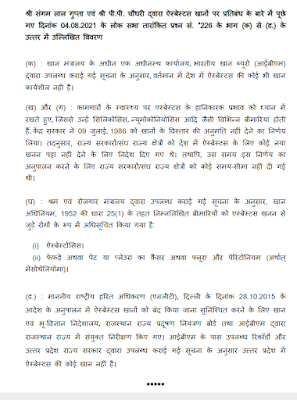 Given the fact that 70 nations have banned asbestos and Brazilian Supreme Court has declared use of asbestos as unconstitutional, question of  Sangamlal Gupta and P.P. Chaudhary  on “Ban on Asbestos Mines” in the Parliament and the reply of Pralhad Joshi, minister of coal and mines assumes significance. The minister replied that no asbestos mine functional in India because of the harmful effect of asbestos. According to World Health Organisation (WHO), 250, 000 are dying annually because of asbestos related diseases. 25 per cent of the entire asbestos produced globally comes to India because India is yet to ban trade, manufacture and use of all kinds of asbestos although it has banned mining of all kinds of asbestos.

The data reveals that despite the Brazilian Supreme Court's landmark verdict declaring use of asbestos to be unconstitutional, it is exporting it to India not realizing that human biology is same everywhere -- what is poisonous for Brazilians and some 70 countries cannot be non-poisonous for Indians. It also brings to light the fact although South Africa, Hungry and Poland have banned asbestos, they continue to export it to India.

The imports of asbestos fibre products were 3,580 tonnes during the year 2019-20 as compared to 4,425 tonnes in the previous year. The imports of asbestos fibre products were mainly from China (31%), Japan (23%) and Denmark (12%). The 2020 report points out that, in addition to asbestos minerals, an unknown quantity of asbestos is traded within manufactured products, possibly including brake linings and pads, building materials, gaskets, millboard, yarn and thread.

Posted by mediavigil at 9:48 PM