Banned in 70 nations, India continues to import and export asbestos

Misguided by a discredited conflict of interest ridden study admittedly co-funded by white chrysotile asbestos companies and undertaken by National Institute of Occupational Health, Ahmedabad, India continues to import  asbestos to the tune of  3,61,164 tonnes in 2019-20. It's important decreased by only 1% as against 3,64,105 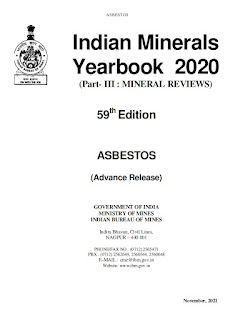 The data reveals that despite Brazilian Supreme Court's landmark verdict declaring use of asbestos to be unconstitutional, it is exporting it to India not realising that human biology is same everywhere-what is poisonous for Brazilians and some 70 countries cannot be non-poisonous for Indians. It also brings to light the fact although South Africa, Hungry and Poland have banned asbestos, they continue to export it to India.

The imports of asbestos fibre products were 3,580 tonnes during the year 2019-20 as compared to 4,425 tonnes in previous year. The imports of asbestos fibre products were mainly from China (31%), Japan (23%) and Denmark (12%). The 2020 report points out that in addition to asbestos minerals, an unknown quantity of asbestos is traded within manufactured products, possibly including brake linings and pads, building materials, gaskets, millboard, yarn and thread.

Some 70 countries have banned all kinds of asbestos including white chrysotile asbestos. World Health Organisation has recommended elimination of all kinds of asbestos and asbestos based products. India has banned mining of all kinds of asbestos because of it's harmful impact on human health. It has been established that safe and controlled use of asbestos is impossible. India has banned trade in asbestos waste ( dust and fibers) and it's use in ships but it continues to trade raw asbestos, asbestos based products  India continues to manufacture and use asbestos based products. This shows that asbestos producers like Russia have overwhelmed India's Ministries of Commerce & Industry and Chemicals. As a consequence no building or vehicle in India is free of carcinogenic asbestos mineral fibers. It is evident that Union and State Governments have failed to resist the influence of asbestos traders and merchants to protect the health of present and future citizens including Presidents, Prime Ministers, Chief Ministers, judges, soldiers and children.